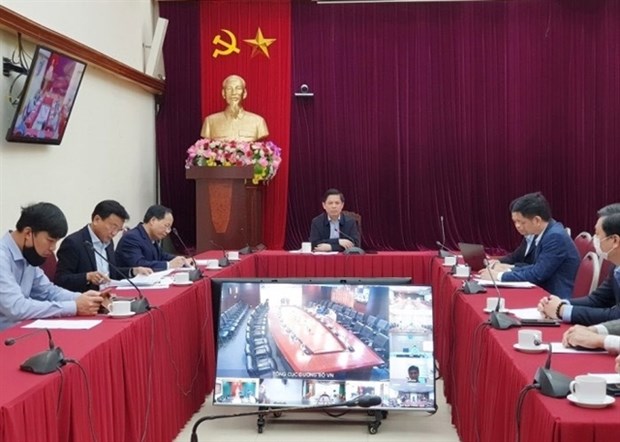 Hanoi (VNS/VNA) – There is just one week left until the deadline for project management boards to step up disbursement to reach 96 percent at the Ministry of Transport, Minister Nguyen Van The said on January 25.

The said the disbursement was moving at below-average on several projects.

Many agencies spend just four in every five dollars that are pledged for spending. They keep one dollar on hold, bide their time and request project adjustment when deadlines are close, unnecessarily dragging out projects.

Lang Son province’s Department of Transport has registered an investment scheme of 83 billion VND (3.67 million USD) but has disbursed just 32 percent of the registered money. They are requesting an adjustment for the National Highway 4A Project.

In such cases, the ministry is going to reject their request and urge local authorities to reprimand agencies that have prolonged disbursement to the detriment of the ministry’s target, according to the minister.

“When disbursement suffers a setback, it is all about looking at ways to overcome the setback, not taking the easy way out by requesting project adjustment,” The said.

The amount of money to disburse in 2022 will be larger than in 2021, staying at around 50 trillion VND (2.2 billion USD), but with additional money from the programme for socio-economic recovery and development.

Given such a huge workload ahead, the minister called on project management boards and agencies to make payments at a faster pace right from January and February to get the year off to a good start.

Regarding projects in Group A, which are subject to the approval of the Prime Minister, agencies must spare no effort to have them completed on time.

For seven projects in Group B and C, which have yet to receive approval, agencies must complete documents faster to the ministry for approval.

43 projects which have been given the green light from the ministry must quickly begin and accelerate disbursement.

Any project management board that has a low disbursement rate in February will be given a warning or face a penalty, warned the ministry’s leader.

Nguyen Danh Huy, director of the ministry’s Department of Planning and Investment , said that about 43 trillion VND (1.9 billion USD) was expected to be disbursed in 2021 under the public investment plan.

Several projects met their disbursement target for 2021, while others are in a rush to clear before January 31, the director reported.

In provinces, 23 out of 32 municipal agencies have managed to disburse money according to plan, the rest are falling short of the target.

Bui Quang Thai, director of the ministry’s Transport Engineering Construction and Quality Management Bureau, noted that 13 projects had missed the mark by January. 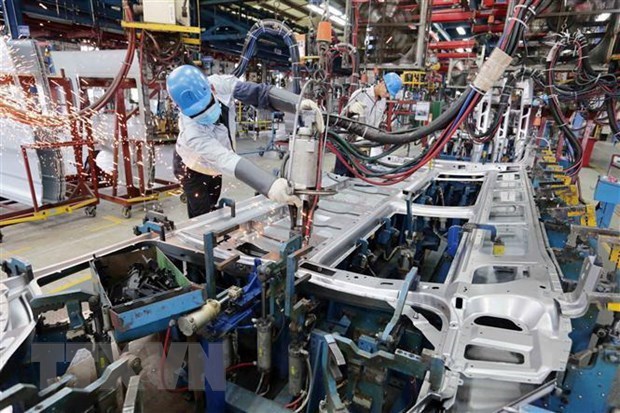 Right from the end of 2021, experts already showed optimism about FDI attraction prospects of Vietnam in 2022 (Photo: VNA)

The first FDI project receiving investment licence in Vietnam in this year is the Hai Lang liquefied natural gas (LNG) power plant project in the central province of Quang Tri with total investment of 2.3 billion USD.

This project alone has made the FDI in January higher than the figure of 2 billion USD recorded in January last year. Meanwhile, many other projects have received investment licences since the beginning of this year, including the addition of 400 million USD to Goertek project in Nghe An and a 136 million USD Coca-Cola project in Long An province.

Right from the end of 2021, experts already showed optimism about FDI attraction prospects of Vietnam in 2022.

The Foreign Investment Agency under the Ministry of Planning and Investment mentioned the plans of many giant firms such as Apple, Samsung, Nike, Adidas and Foxconn to expand operations in Vietnam. Furthermore, the plans to invest 1 billion USD in LEGO factory in Vietnam and Intel’s plan to add 2.5 billion USD to is projects in Vietnam as well as Hanamicrom’s intention to invest in a semiconductor factory in the country have also been revealed.

The agency commented that 2022 and following years will be good years for Vietnam with many large-scale and high quality projects from world leading firms. 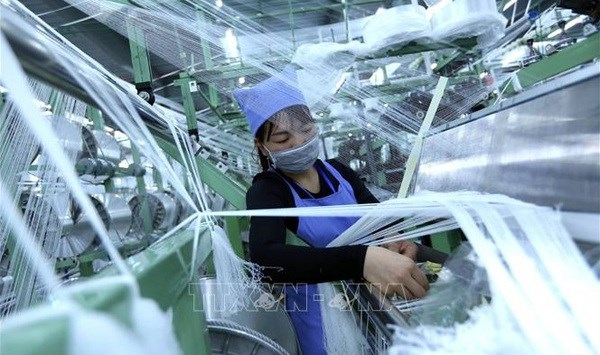 67 percent of European businesses said that they are optimistic about the business climate in Vietnam (Photo: VNA)

Meanwhile, 67 percent of European businesses said that they are optimistic about the business climate in Vietnam. At the same time, a survey by Japan External Trade Organization (JETRO) showed that 55.3 percent of Japanese said that they intend to expand business in Vietnam, and only 0.3 percent plan to withdraw from Vietnam. According to the survey, which was conducted from August to September 2021, 56.2 percent of the firms expect higher profits in 2022, and only 9.6 percent predicted lower profit.

According to Hirai Shinji, Chief Representative of JETRO in Vietnam, the Japanese firms intending to withdraw from Vietnam still hoped to return to the country when things become better.

In reality, many other firms have come back to Vietnam since the Government adopted the strategy of safely and flexibly adapting to the COVID-19 pandemic.

The business expansion of many other foreign firms in Vietnam, including Samsung from the Republic of Korea, JAPEX from Japan and Sri Avantika Contractor Ltd from India, is also expected to lead to many other opportunities for Vietnam in FDI attraction./.

Chopra & Jonas bought their California mansion together in 2019 with children in mind.

Global icon Priyanka Chopra and her singer-husband Nick Jonas have stepped into the shoes of new parents, and Bollywood actress Anushka Sharma has a message for them.

The mother to one-year-old Vamika penned a cute wish for the new parents in town, and asked them to be ready for sleepless nights, and unparalleled joy and love.

“Congratulations Priyanka and Nick… Lots of love to the little one,” the 33-year-old added.

Last week on Saturday, the celebrity couple announced the birth of their first child via surrogacy on January 15.

In a joint statement, they shared, “We are overjoyed to confirm that we have welcomed a baby via surrogate. We respectfully ask for privacy during this special time as we focus on our family. Thank you so much.”

PeeCee’s actor-friend Kal Penn, who recently got engaged to his partner, commented that ‘Kalpen uncle’ was ready to babysit.

While the couple didn’t reveal the gender or name of their baby, a source to People magazine revealed that the new addition is a beautiful baby girl.

The source further informed that the duo have been thinking about starting a family for quite some time, and hence have been busy prepping their Los Angeles home for the new addition.

The star couple bought their Encino, California mansion together in 2019 with children in mind. “They were hoping to have kids and needed a place with a lot of outdoor space and greenery,” the People source informed.

The large property, which they picked up for USD 20 million, broke records for being the most expensive home ever sold in Encino, a suburban neighbourhood in the San Fernando Valley, as reported at the time, according to People .

The People magazine revealed that the 29-year-old Jonas Brothers musician and the 39-year-old ‘Matrix Resurrections’ star ‘spent months renovating the house’ after they moved in. “They wanted to make it more family-friendly.”

The couple had tied the knot in two glamorous ceremonies at the Umaid Bhawan Palace in Jodhpur, India, in front of 225 guests in late 2018.

While the happy couple first wed in Jodhpur, they had two ceremonies over the course of five days, one Hindu and one Christian, to honour each of their cultures, which they blended during each celebration.

The centre will also partner with world-class education and research institutions in the UK to collaborate on technology research and development.

Ola Electric on Thursday said it will invest over USD 100 million (about Rs 750 crore) over the next five years and set up a global centre for advanced engineering and vehicle design in the UK. This centre – called the Ola Futurefoundry – will be based in Coventry, UK, and work in-sync with the design and engineering teams based at Ola Campus in Bengaluru, a statement said.

“It will house global talent across multiple disciplines of 2W and 4W vehicle design, advanced high-performance automotive engineering, digital and physical modeling and more,” it added.

The centre will also house talent that will focus on vehicle R&D around new energy systems including cell technologies.

“Ola will invest over USD 100 million over the next five years into the state-of-the-art centre and staff it with over 200 designers and automotive engineers,” the statement said.

The centre will also partner with world-class education and research institutions in the UK to collaborate on technology research and development, it added.

“At Ola we are building the future of mobility and continue to attract the best global talent across disciplines. Ola Futurefoundry will enable us to tap into the fantastic automotive design and engineering talent in the UK to create the next generation of electric vehicles,” Ola founder and CEO Bhavish Aggarwal said.

He added that Futurefoundry will work in close collaboration with the company’s headquarters in Bengaluru to help build the future of mobility as it makes EVs affordable across the world.

“Ola Futurefoundry is an important step in building a multi-disciplinary team that is agile, flexible, and responsive to the various needs of our consumers around the world. We are setting up in Coventry a global epicenter of automotive and technology talent,” Ola Electric Vice President of Vehicle Design Wayne Burgess said.

Futurefoundry will supplement and collaborate with the core team in Bengaluru to deliver exciting new EVs across two-wheeler, four-wheeler and other form factors, he added.