A$AP Rocky’s upcoming court date doesn’t appear to be affecting him, as he’s been seen in public with his partner Rihanna on multiple occasions recently.

The rapper is being charged with assault with a firearm in relation to a shooting incident in Hollywood last year. Rocky is due to appear in court Wednesday and could face up to nine years in prison if he’s found guilty.

While he is facing serious charges and lengthy jail time, Rocky has been spotted out with Rihanna recently. In May, it was reported that Rihanna had given birth to a son, the couple’s first child together. The name has yet to be publicly confirmed.

The couple were spotted together in New York City on Friday, laughing as they walked around the city. A few days later they were photographed together again, this time stepping off a flight in Los Angeles while a member of their security team carried their son to the car. The images of them disembarking from the plane were taken on Sunday by Backgrid.

On Monday, it was confirmed that the Los Angeles district attorney had charged Rocky, whose real name is Rakim Mayers, with assault with a firearm. He faces two counts of assault with a semiautomatic firearm with allegations of personally using a firearm.

The Los Angeles Times reported that Rocky is set to be arraigned Wednesday in a downtown Los Angeles courtroom.

Rocky was first arrested in April in connection with the November 2021 shooting that was non-fatal; he was later released on bail of $550,000. Following a warrant for his arrest, law enforcement found multiple firearms while searching Rocky’s property.

At the time, the Los Angeles Police Department’s Twitter account shared details of the incident and confirmed they’d arrested Rocky.

A member of the A$AP collective, A$AP Relli (a.k.a. Terell Ephron) identified himself as the alleged victim. He is suing Rocky, alleging assault and battery, negligence and emotional distress.

Ephron claimed he was “lured” to a location in Hollywood where Rocky fired multiple shots. According to the court papers, Ephron stated he was “struck by bullet projectile/fragments” in his left hand and required medical attention. He is seeking at least $25,000 in damages.

Los Angeles County District Attorney George Gascón said: “Discharging a gun in a public place is a serious offense that could have ended with tragic consequences, not only for the person targeted but also for innocent bystanders visiting Hollywood.

“My office conducted a thorough review of the evidence in this case and determined that the addition of a special firearm allegation was warranted.”

A$AP Rocky and Rihanna have reportedly been together since 2020, with Rocky confirming their relationship to GQ in May 2021 and calling her the “love of my life.”

U.S. rap star A$AP Rocky has got the help of major celebrities and politicians after being detained in Sweden following a street altercation that was captured on video.

The rapper, real name Rakim Mayers, was arrested while on tour in Stockholm for “gross assault” after a street brawl between his entourage and two men on June 30, according to The Hollywood Reporter .

But according to the rapper’s Instagram account, the victim is seen with another man following and repeatedly harassing him. The rapper said that a fight broke out after the men swung at his security first.

Celebrities rallied to his support after reports emerged that he was in solitary confinement, with his manager John Ehmann writing on Instagram that he was enduring a “lack of access to life-sustaining food as well as unsanitary conditions.”

Along with her husband Kanye West, Kim Kardashian West tweeted a link to a TMZ report that said, “President Trump is very much aware” of A$AP Rocky’s legal situation and that “he’s got his team working to get him freed.”

This followed contact between the rapper’s management and Trump’s son-in-law, Jared Kushner, who raised the case with the president. The U.S. State Department is also “actively working to get A$AP out of jail,” according to TMZ.

The rapper has also had the backing of Reps. Adriano Espaillat, Hakeem Jeffries, André Carson, and Joaquin Castro, all of whom claimed he was being kept in “inhumane conditions,” The Washington Post reported.

On Thursday, Kardashian tweeted her thanks for the political efforts being made to help the rapper.

“Thank you @realDonaldTrump , @SecPompeo , Jared Kushner & everyone involved with the efforts to Free ASAP Rocky & his two friends. Your commitment to justice reform is so appreciated,” she added, in reference to her meeting with the president to discuss prison reform last year.

The 30-year-old musician was raised in Harlem, New York, and moved to New Jersey where he started rapping. A member of the hip-hop group A$AP Mob, from which he adopted his stage name, he came to the attention of Sony in 2011 with the mix-tape Deep Purple , which was followed by the street album Live.Love A$AP .

The album was re-released by Sony in 2012, the year he performed alongside Rihanna at the MTV Music Video Awards, according to allmusic.com.

The album Long.Live.A$AP was released in 2013 and went to number one on the Billboard 200 in its first week. His second album, At Long Last A$AP also debuted at number one. He is also a music producer, operating under the pseudonym Lord Flacko.

Prosecutors allege that during an argument on Nov. 6, 2021, Mayers pointed the handgun at the victim, then in a subsequent confrontation drew the gun again and fired twice in the direction of the man, who sustained a minor injury. His name has not been released.

Mayers has not entered a plea to the charges. He is scheduled to be arraigned Wednesday. An email seeking comment from representatives was not immediately returned.

“Discharging a gun in a public place is a serious offense that could have ended with tragic consequences not only for the person targeted but also for innocent bystanders visiting Hollywood,” said District Attorney George Gascón said in a statement. 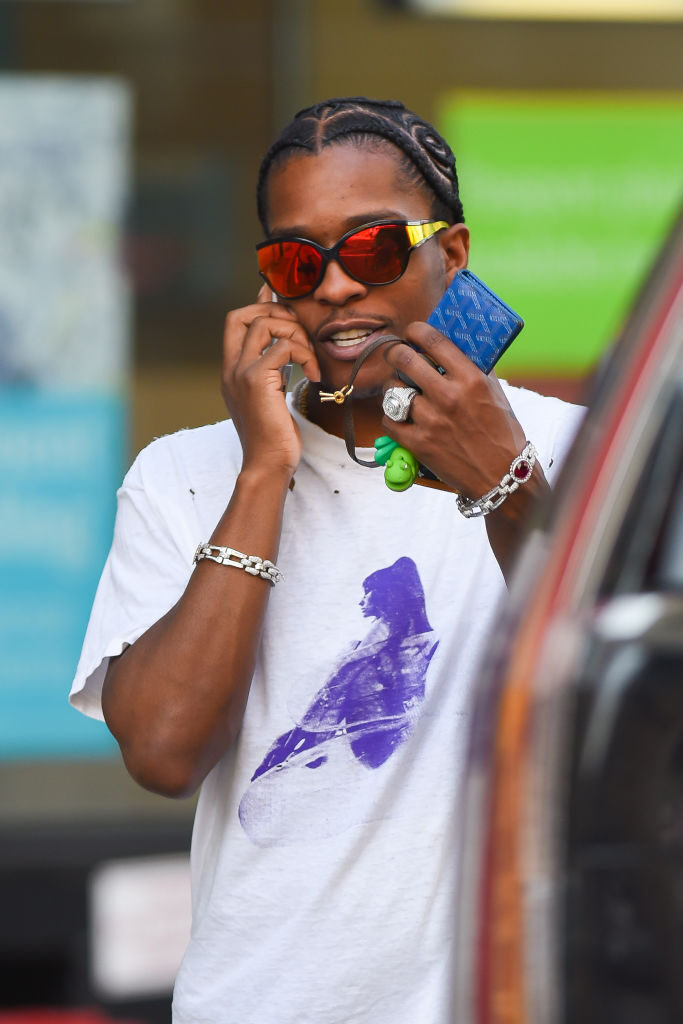 Mayers and two other men fled the scene after he fired the gun, police said. He was first arrested for the incident at Los Angeles International Airport on April 20, and was released on bail the same day.

He is in a relationship with Rihanna, and the two had a son in May .

Mayers released his last studio album four years ago, and like Rihanna has become as known for fashion trendsetting as he is for music.

He was the focus of international attention in 2019 after being detained for nearly a month in Sweden following a street brawl. He was found guilty of assault and given a “conditional sentence” that meant no additional time in jail.

(CNN) Rapper A$AP Rocky was charged Monday with two counts of assault with a semiautomatic firearm, with allegations of personally using a firearm, in connection with a shooting last year in California, according to the Los Angeles County District Attorney’s Office.

Two people were arguing in the Hollywood area of the city on November 6, 2021, when, police say, it escalated and the rapper allegedly fired a handgun. The person who was shot sustained a minor injury and sought medical treatment, police said.
The rapper was arrested in April at Los Angeles International Airport and was later released on a $550,000 bond.
“Discharging a gun in a public place is a serious offense that could have ended with tragic consequences not only for the person targeted but also for innocent bystanders visiting Hollywood,” George Gascón, LA County District Attorney, said in a statement . “My office conducted a thorough review of the evidence in this case and determined that the addition of a special firearm allegation was warranted.”
CNN has reached out to A$AP Rocky’s representatives for comment. The rapper and his partner, superstar singer Rihanna, welcomed their first child earlier this year.
Read More
A$AP Rocky is scheduled to be arraigned on Wednesday at the Foltz Criminal Justice Center.

Rapper A$AP Rocky was charged with assault and accused of firing a handgun toward a former friend in November, reports said.

The rapper, whose real name is Rakim Mayers, has been hit with two counts of assault with a semiautomatic firearm with allegations of personally using a firearm, Los Angeles County District Attorney George Gascón’s office said in a press release.

“Discharging a gun in a public place is a serious offense that could have ended with tragic consequences not only for the person targeted but also for innocent bystanders visiting Hollywood,” the official statement read.

“My office conducted a thorough review of the evidence in this case and determined that the addition of a special firearm allegation was warranted,” the press release continued.

The Praise the Lord rapper, 33, is set to be presented before the judge on Wednesday (Aug. 17).

The alleged shooting took place on November 6, 2021, after an argument in Hollywood. Rocky was detained in connection with an investigation by the LAPD into a non-fatal shooting in Hollywood on Nov. 6 and released on $550,000 bond.

At the time of the arrest earlier this year, Rocky returned to Los Angeles on a private plane after a vacation in Barbados with Rihanna, according to TMZ report.

The case remains under active investigation by the Los Angeles Police Department.