Hertha announced on Thursday morning that head coach Pal Dardai, assistant coach Admir Hamzagic and striker Dodi Lukebakio had tested positive, and that the team and staff would go into isolation, but still be able to train and play.

But a fourth positive test, this time defender Marvin Plattenhardt, led to a mandatory 14-day quarantine. All four are said to be symptom-free.

Hertha have applied to postpone their three upcoming fixtures against Mainz on Sunday, Freiburg on Wednesday and Schalke next Saturday but, with regulations stating that any further positive cases would see the 14-day quarantine period start from scratch again, further postponements could follow, leading to a fixture pile-up.

“The same rules apply to Hertha as to schools and hospitals,” said Detlef Wagner of the local council in Berlin-Charlottenburg.

“It is absolutely the right step from a health perspective,” said Hertha sporting director Arne Friedrich. “It obviously affects us from a sporting point of view because we will have six games to play before the end of the season on May 22nd.

“The team will keep fit with coached virtual sessions during the quarantine. We will do everything in our power to have a successful end to the season.”

Hertha have already endured a difficult season, sacking former head coach Bruno Labbadia and general manager Michael Preetz due to a poor run of form and goalkeeping coach Zsolt Petry for remarks considered homophobic in a Hungarian newspaper. They currently sit fourth from bottom, outside the relegation zone on goal difference only.

Hertha may be the first Bundesliga team to have to quarantine, but the fixtures have been piling up in Germany’s second division for weeks.

Particularly affected are promotion-chasing Holstein Kiel, whose last four games have been postponed due to team quarantine measures, seeing them drop out of the top three.

With a German Cup semifinal against Borussia Dortmund scheduled for May 1, the last day of the season falling on May 23, and the relegation/promotion playoffs following just three days later, Kiel face a mammoth schedule.

The situation is reminiscent of that of Dynamo Dresden last season, who were forced to play nine fixtures in 29 days and were ultimately relegated to the third division.

Elsewhere, Kiel’s promotion rivals Hamburg, who are attempting to return to the Bundesliga at the third attempt, have had their game against Karlsruhe on Tuesday postponed. Like Kiel, the Karlsruhe squad is in quarantine until April 20 due to coronavirus infections, two more of which were reported on Thursday.

International football has been affected too, with Germany’s Felicitas Rauch testing positive ahead of a friendly against Australia last weekend. Despite testing negative, teammates Lena Oberdorf, Sara Doorsoun and Svenja Huth also had to quarantine due to close contact with Rauch.

In a letter to the 36 clubs which make up the top two divisions on Thursday, DFL chief executive Christian Seifert ruled out ending the season with teams in isolated “quarantine training camps” for now but warned of the potential fixture pile-up if cases continue to rise.

“This decision is based on the basic assumption that all clubs want to end the season, including the playoff games, on the pitch [and not by lottery],” read the letter, which was seen by Kicker magazine.

It also suggested additional measures, including the permanent wearing of FFP2 masks, increasing the number of team buses, showering and changing at home after training, holding team meetings outdoors where possible and leaving rows of seats empty on flights.

The president of second division side Sandhausen, Jürgen Machmeier, recently suggested to public radio station Deutschlandfunk that the end-of-season promotion/relegation playoffs be scrapped if necessary — a scenario the DFL would like to avoid, given that those games attract large TV audiences.

In cases of infection due to “careless breaches of the hygiene concept,” the DFL also warned that such players are still to be considered as “eligible to play,” and that therefore, should their behavior result in their club not being able to field a team, any such match would not be postponed, but simply awarded to the opponent.

As COVID-19 kept consumers around the world at home, nearly everything from groceries to gardening supplies was purchased online.

For retailers, restaurants, and other businesses large and small, being able to sell online provided a much-needed lifeline as in-person consumer spending was disrupted.

Roughly 20-30 per cent of the COVID-19-related shift to digital globally is expected to be permanent, according to Mastercard’s Recovery Insights: Commerce E-volution.

The report draws on anonymised and aggregated sales activity in the Mastercard network and proprietary analysis by the Mastercard Economics Institute. The analysis dives into what this means by country and by sector, for goods and services, and within countries and across borders.

“While consumers were stuck at home, their dollars travelled far and wide thanks to e-commerce,” says Bricklin Dwyer, Mastercard chief economist and head of the Mastercard Economics Institute. “This has significant implications, with the countries and companies that have prioritised digital continuing to reap the benefits. Our analysis shows that even the smallest businesses see gains when they shift to digital.”

Early digital adopters go into overdrive: Economies that were more digital before the crisis – such as the UK and US – saw larger gains in the domestic shift to digital that look more permanent than the countries that had a smaller share of e-commerce before the crisis, such as Argentina and Mexico. The Asia-Pacific, North America, and Europe were the strongest regions in driving e-commerce adoption.

Grocery and discount store digital gains look sticky: Essential retail sectors, which had the smallest digital share before the crisis, saw some of the biggest gains as consumers adapted. With new consumer habits forming and given the low pre-COVID-19 user base, Mastercard anticipates 70-80 per cent of the grocery e-commerce surge to stick around for good.

Consumers increase their e-commerce footprints, buying from up to 30 per cent more online retailers: Reflecting expanded consumer choice, the report shows that consumers worldwide are making purchases at a greater number of websites and online marketplaces than before. Residents in countries like Italy and Saudi Arabia are buying from 33 per cent more online stores, on average, followed closely by Russia and the UK.

Shift to electronic payments accelerated in the US: Even in store, COVID-19 accelerated the transition to digital – with more consumers moving from plunking down cash to touch-free payments. According to the company’s analysis of payment forms at brick-and-mortar retail stores and restaurants, non-cash payments jumped by an additional 2.5 percentage points beyond the ongoing trend. This led to an acceleration of the shift from cash to electronic payments by a full year.

Among the affected, 540,000 lost their jobs during the period while 3.1 million had their working hours reduced or took unpaid leave, with 6.5 million others reporting reduced incomes, the General Statistics Office (GSO) reported Friday.

The country’s labor force shrunk by 1.1 million against the previous quarter to 51 million, the report stated.

Pham Hoai Nam, head of the GSO’s department of population and labor statistics, blamed the dark picture on the resurgence of Covid-19 before the Lunar New Year, the country’s biggest festival.

Vietnam encountered a new wave of Covid-19 on Jan. 28 in what the government said was caused by the U.K.-originated variant. In February, many areas in Vietnam were placed under lockdown as authorities raced against time to contain the spread of the virus.

The service sector was hit hardest by the crisis with 20.4 percent of workers affected, followed by the processing and manufacturing industries, along with agriculture.

The average monthly income in the first quarter was VND6.3 million ($272.95), down 2.3 percent over the previous year.

Severe Covid-19 impacts have seen as many as 40,300 companies shut up shop in the first quarter, a year-on-year increase of 16 percent.

GSO hoped the government would soon implement a Covid-19 vaccine passport so aviation, tourism and services could recover from the impacts of the pandemic.

The government closed borders and canceled all international flights in March last year, allowing in only certain categories of people including foreign diplomats and specialists and with stringent conditions.

The government has set a GDP growth target of 6.5 percent for 2021. 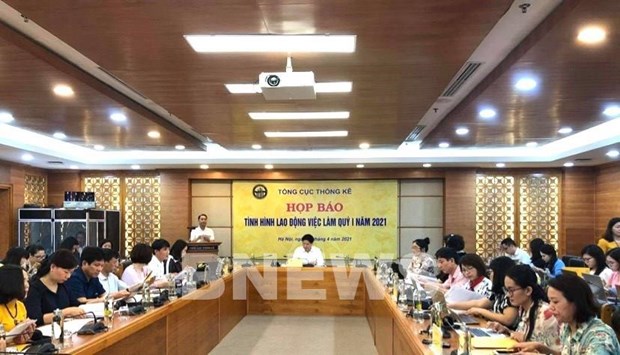 Hanoi (VNA) – As many as 9.1 million Vietnamese people aged 15 and above were affected by the COVID-19 pandemic in the first quarter of this year, Director of the Department of Population and Labour Statistics under the General Statistics Office (GSO) Pham Hoai Nam told a press conference on April 16.

Nam said that of those affected, 540,000 people lost their jobs and 2.8 million had to temporarily cease business and production activities .

Meanwhile, 3.1 million people said they had their hours cut or were forced to take time off from work, while 6.5 million workers reported reductions in their income.

Nguyen Minh Huy, deputy director of the department, said Vietnam recorded fewer workers in the first quarter of 2021 both quarter-on-quarter and year-on-year. Vietnam has long posted rising numbers of workers each year.

The workforce totalled 51 million people in the quarter, down 1.1 million quarter-on-quarter and nearly 181,000 year-on-year.

The GSO said the third wave of COVID-19 in Vietnam affected the recovery of the country’s labour market, pushing a lot of people, especially women, into the informal economy.

The number of employed workers aged 15 and over in the first quarter was 49.9 million, down more than 959,000 against the previous quarter and nearly 178.000 against the same period last year./.

This information was unveiled by the General Statistics Office (GSO) during a press conference held on April 16 in Hanoi aimed at reviewing the local labour and employment situation during the first quarter of the year.

Out of a total of 9.1 million people adversely affected by the COVID-19 pandemic, 540,000 people lost their jobs, whilst 2.8 million people endured temporary work stoppages.

Furthermore, 3.1 million people have seen their working hours cut down, been forced to leave work, or have been laid-off, while 6.5 million workers have had their incomes reduced.

Most notably, the third outbreak of the COVID-19 epidemic which occurred over the Lunar New Year period significantly increased the number of underemployed workers in comparison to the previous quarter and the same period from last year.

Throughout the reviewed period, the average monthly income of employees reached VND6.3 million, representing an increase of VND339,000 compared to the previous quarter and a rise of VND106,000 compared to last year’s corresponding period.

The number of unemployed people of working age hit nearly 1.1 million, marking an increase of more than 12,000 people over the same period from last year.

To deal with the situation, the GSO has proposed that a number of solutions be implemented in order to remove difficulties for the labour market. This can be done through the acceptance of vaccine passports, thereby developing the necessary criteria to reopen the international tourism market in order to revive the local tourism industry.

It is anticipated that the development of these sectors will attract a large number of employees as a contribution to fully utilising the existing workforce.