Birmingham: New Zealand are set to wrap up the second and final Test against England, and with it the series, after their bowlers triggered a collapse in the second innings on the third day on Saturday. At stumps, England were 122 for nine wickets, just 37 runs ahead, and one wicket left.

With two full days to go in the match, New Zealand, who made six changes in the XI for this match, have all the time in the world to complete the formalities in the first session of the fourth and penultimate day on Sunday at Edgbaston.

So far, the highest score of England`s second innings has been Mark Wood`s 38-ball 29 (5x4s, 1×6) while Ollie Pope is second with a 20-ball 23 (3x4s). At stumps, Olly Stone was batting on 15 off 53 balls (2x4s), showing the more established batsmen of his team how to bat in such conditions, while James Anderson was yet to open his account.

Earlier, New Zealand took a crucial 85-run first-innings lead, thanks to meaningful knocks from Will Young (82), Devon Conway (80) and Ross Taylor (80). However, the New Zealand lower-order batsmen did not contribute much and their last seven batsmen, barring wicket-keeper Tom Blundell (34), did not add much to the total.

At tea, England were 18 for two wickets in six overs. Pacer Matt Henry removed both openers, Rory Burns (0) and Dominic Sibley (8), with the total being 17. After the interval, New Zealand bowlers dismissed seven England batsmen and took their team closer to victory.

The first Test had ended in a draw.

The damage had been done on Saturday, as England collapsed to 122-9 in their second innings, leaving the Black Caps on the verge of their first Test series win in England since 1999.

Trent Boult sent Olly Stone back to the pavilion with the first delivery of day four, leaving New Zealand chasing a mere 38.

Devon Conway was dismissed in the second over, though stand-in captain Latham (23) ticked off a milestone as New Zealand cruised to a maiden Test win at Edgbaston, setting themselves up for the ICC Test Championship final against India in emphatic fashion.

Any possibilities of complacency creeping in from New Zealand were dashed before a minute of play, Boult’s supreme delivery nicking off Stone’s edge and through to Tom Blundell.

A maiden over from James Anderson – whose record-setting Test match has not gone according to script – kept Latham, six off his 4,000th run in the longest format, at bay, and Stuart Broad subsequently gave the crowd something to cheer.

Conway fished at a delivery outside his off stump, with James Bracey gathering it in.

Latham and Will Young knew the Test was won, though, with sensible shots from New Zealand’s stand-in skipper ticking him towards the landmark, which came when he nudged Broad for a single.

Mark Wood very nearly ran Latham out with an acrobatic, underarm throw from close range, though even that wicket would have been immaterial.

After clipping a brilliant shot through backward point, Young dragged a wider Stone delivery onto his stumps, but Latham fittingly had the final say.

A sublime flick to the legside boundary was followed up by a deft touch through to third man to seal a 1-0 series win, just New Zealand’s second in England.

No home comforts for sorry England

England’s footballers get their Euro 2020 campaign started on Sunday, and the Edgbaston crowd were singing “football’s coming home” as they watched the cricketers learn a brutal lesson in the Birmingham sunshine.

Joe Root’s team, who have lost a series on home soil for the first time since 2014, do not convene again until they host India in August. While they had injuries to key players, along with off-the-field issues that marred the first Test, England have much to improve on, with their batting once again letting their bowling attack down.

Black Caps top the rankings as dominance over England rolls on

With this triumph, New Zealand have moved ahead of India to the top of the ICC Test rankings, though the ultimate test will of course come in the inaugural ICC Test Championship final against Virat Kohli’s team in Southampton next week.

New Zealand may have ended a dismal run in England, but overall, they have now not lost a Test to them since 2015 – a run of seven. 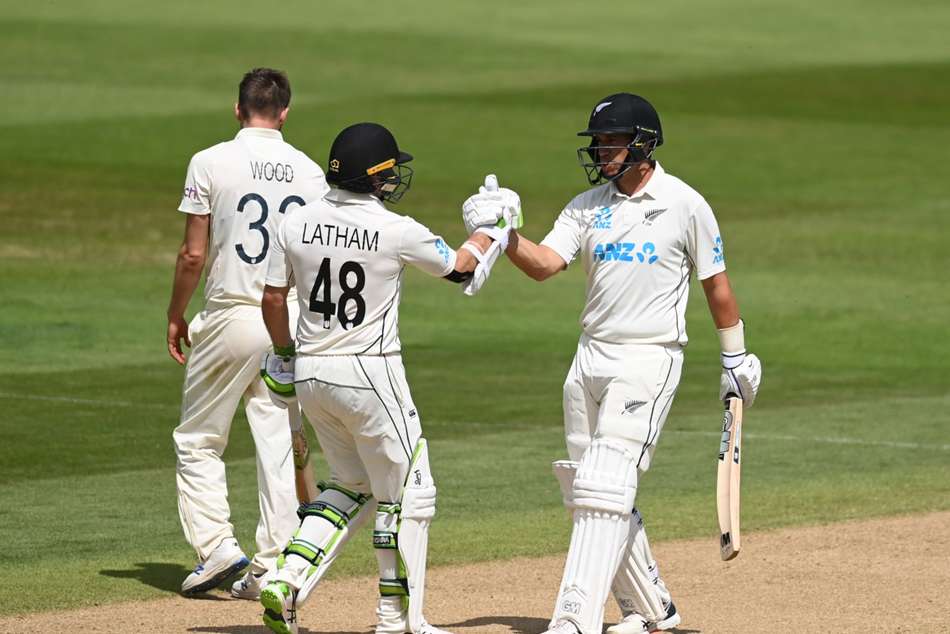 New Zealand clinched just their third series win in England – and first since 1999 – as they eased to a win which takes them to the top of the ICC Test rankings.

The Black Caps, who face India in the ICC Test Championship final next week, did the damage on Saturday, leaving England heading into day four on 122-9 in their second innings.

Trent Boult dismissed Olly Stone with the first delivery on Sunday, and New Zealand tallied up the 38 they required to win within the hour, although Devon Conway and Will Young lost their wickets.

England do not play another Test series until August, when they host India, and Root knows there is much to improve upon.

“More than anything, it’s what we can take from it. You can have bad sessions on occasion with the ball but you can’t have a session like that with the bat,” he said at the post-match presentation.

“That’s cost us, but throughout the game New Zealand outplayed us. If we lose quick wickets, how are we going to get through that? Mentally we have to make sure we’re resilient and we manage passages of play better.

“It’s the lessons from watching the opposition, using the experience in the dressing room, and trying to make sure when you’re in the same situation to don’t make the same mistakes.

“You can look for excuses but they outplayed us, they played good cricket and we’ve not matched that. We know we’re better than this.”

England have white-ball series against Sri Lanka and Pakistan coming up, and Root is hoping a switch to a different format will offer a reset for some of the squad.

“Freeing the mind, look at the game in a different context, it can liberate you. It’s the chance to go back into a different format and find rhythm,” he added.

“You can never beat wickets and runs.”

“Great to have that performance, through the four days it was outstanding, with a few changes, everyone came out and did their roles. It was a complete team performance,” he said.

“[England have] a fantastic attack, a lot of wickets among them. We played them really well on surfaces we weren’t expecting at Lord’s and here. I thought we adapted well.” Sky Sports pundit Nasser Hussain says England must get back to

Nasser Hussain has lambasted England’s batsmen for abandoning conventional methods after a shocking collapse at Edgbaston left them on the verge of defeat to New Zealand.

Joe Root’s side crumpled to 76-7 before tailenders Mark Wood and Olly Stone at least prevented an innings defeat, but they look destined to lose the match and the series when play resumes on Sunday.

Sky Sports pundit Hussain insists English batsmen urgently need to re-examine their techniques and return to basics – not only at Test level, but throughout the county game – if they are to improve in future.

“There seems to have been a reinvention of the wheel out there with batting,” said Hussain. “Techniques out there that everyone else who has played the game before – they are all wrong and we are right.

“Whether it being the seaming ball or the spinning ball, they are right and everyone else is wrong. And I don’t see a young batting line-up.

“I see Sibley, Burns, Crawley, Root and Pope. There’s no one missing in that top five – then come Stokes and Buttler. They’ve got all the coaches, all the backroom staff – please, just get back to playing normally and getting a first innings score.

“So please, have a look at your game and more importantly have a look at the opposition – they are batting how you’re supposed to. It’s just chalk and cheese.

“Technically gifted, sound batsmen playing the game the way it’s supposed to be played – let the ball come to you, leave it well and play with a straight bat. Six changes they’ve made and they still look such a sharp outfit.”

While Hussain acknowledged that the quality of pitches in county cricket has been a factor in England’s dismal showing with the bat, he is also unimpressed by what might seem to be an over-reliance on coaching and outside help.

“I think there’s almost too much money in the game that we’re going to have a batting, eating, psychological, bowling, fielding, captaincy coach for everything,” he added.

“Take ownership of your own game. Look at what Trent Boult’s done in this series – he rushed over here to play in this game.

“How many England players, from quarantine, from rotation, have said ‘I want to play at Edgbaston’?

“Jonny Bairstow, when he was in Sri Lanka, batting well, should have been knocking down the door, saying to the selectors ‘I don’t want to be left out’. Chris Woakes here, he hasn’t played for six months.

“Yes, the pitches are not good enough – if you improve those in county cricket, technique will improve and long batting will improve. But don’t let’s keep making excuses for a batting line-up that continues to fail.”

Fellow pundit and former England batsman David ‘Bumble’ Lloyd was in agreement with Hussain’s assessment – pointing out that the home side’s descent to 122-9 at stumps, an overall lead of just 37, took place on a relatively benign surface.

He said: “There was a total lack of technique. It was shocking – there will be lots to be said.

“They’ve been out of the game from start to finish, on a placid pitch. It’s not good enough.

“The England bowlers are disciplined. I thought they did wonderfully well to get New Zealand out for 388, but then the batsmen have to show up – and they haven’t. It just won’t do and they’ve got to improve.

“I keep going back to technique. You’ve got to be tight in your strokeplay.

“I’m like a broken record, I’ve seen all the great players of the last 50-60 years, and they’ve all had a tight defence.”

Watch day four of the second Test between England and New Zealand from 10.15am, Sunday on Sky Sports Cricket.

NEW ZEALAND TOUR OF ENGLAND, 2021
by Cricbuzz Staff • Published on

New Zealand had to chase down just 38 to seal the game. © Getty

A stellar New Zealand bagged the series with a comprehensive eight-wicket win against England in Birmingham on the fourth day of the second Test. After having bowled out England for their overnight score of 122, they chased down the required 38 runs in 10.5 overs to cruise to victory on Sunday (June 13) that helped them seal their first series on English soil since 1999.

It took Trent Boult just one ball to quash any hope of England extending their overnight lead of 37, ekeing out an edge off Olly Stone’s bat. England were bowled out for 122, leaving New Zealand a paltry total to chase down. Although they lost Devon Conway and Will Young on the way, skipper Tom Latham hit the winning runs to take New Zealand to only their third series victory in England.

New Zealand had made as many as six changes from the first Test with even regular skipper Kane Williamson missing out. Yet, the replacement personnel were impressive leaving New Zealand with a happy selection headache ahead of the impending World Test Championship final. England have a lot of thinking to do after their dismal batting performances, but it was their poor catching that cost them in the end that allowed New Zealand to get away with more than they’d have hoped.

I’ve put a lot of pressure on England by not performing: Root

Why England’s Test batting is in a deepening malaise