The White House on Monday tried to downplay President Joe Biden’s responsibilities on crime, telling reporters that the problem is “complicated.”

Referring to a recent New York Times article on rising crime, Jean-Pierre noted “the crime is complicated and multifaceted” and pivoted to promoting Biden’s spending bills.

When Doocy asked again whether Americans in major cities should feel safe, she replied, “It is not a yes or no question, it is very much a question of what has he done, that’s how we see the question.”

“In Pennsylvania, the Republicans have been spending millions of dollars on the air on crime ads against Fetterman because that’s where they see his vulnerability,” Psaki said in an interview on NBC’s Meet the Press on Sunday adding that crime was “a huge issue” in Pennsylvania.

But Jean-Pierre dismissed the comments from her former boss, accusing Doocy of mischaracterizing the comments.

“I don’t agree with your characterization of what she actually said,” she replied. 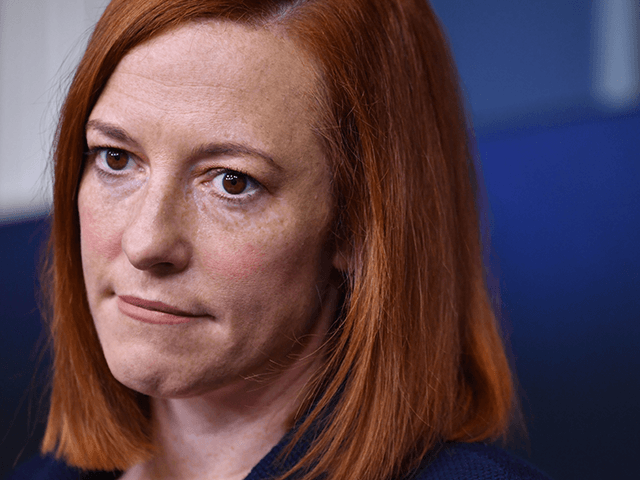 White House Press Secretary Jen Psaki speaks during a press briefing on January 29, 2021, in the Brady Briefing Room of the White House in Washington, DC. (NICHOLAS KAMM/AFP via Getty Images)

India has advised its nationals in Canada to stay alert and exercise caution in view of the rise in reported hate crimes and activities that the Indian state considers detrimental to its interests.

The Ministry of External Affairs (MEA) issued an advisory in this regard on Friday and put on record that the Government of Canada had so far failed to deliver justice in the cases concerned.

“There has been a sharp increase in incidents of hate crimes, sectarian violence and anti-India activities in Canada. In view of the increasing incidence of crimes, Indian nationals and students from India in Canada and those proceeding to Canada for travel/education are advised to exercise due caution and remain vigilant,” stated the advisory.

Advisory for Indian Nationals and Students from India in Canada https://t.co/dOrqyY7FgN pic.twitter.com/M0TDfTgvrG

The public notice was put out a day after the MEA described the September 18-19 ‘Referendum on Khalistan’ organised by some individuals in Ontario’s Brampton as “deeply objectionable”. Apart from the ‘referendum’ that triggered tension within parts of the Canadian society, there have been a number of incidents of swordfights that involved people of Indian origin. Canadian authorities have made a few arrests and the investigation into the incidents are under way.

“The Ministry of External Affairs and our High Commission/Consulates General in Canada have taken up these incidents with the Canadian authorities and requested them to investigate the said crimes and take appropriate action. The perpetrators of these crimes have not been brought to justice so far in Canada,” declared the advisory. It urged Indian nationals and students to register with the High Commission of India in Ottawa or Consulates General of India in Toronto and Vancouver through their own websites or the MADAD portal (madad.gov.in) to help coordinate better in case of any emergency.

The Alexandria Smoke Alarm Safety Installation Taskforce installs smoke alarms in neighborhoods around the city with help from volunteers.

ALEXANDRIA, VA — Smoke alarms will be installed in Alexandria’s East Lynhaven Gateway neighborhood as part of an effort to ensure all homes in the city have working smoke alarms.

“Fire can spread rapidly through your home, leaving you as little as one or two minutes to escape safely once the smoke alarms sound,” said Fire Chief Corey Smedley on the task force’s web page. “Smoke alarms are an important part of a home fire escape plan and can save lives during a fire. With the help of our partners at American Red Cross and Volunteer Alexandria, the Alexandria Fire Department’s ASSIST program will continue to make an effort to educate residents on fire prevention and make sure they have working fire alarms.”

Residents may request a smoke alarm installation for their neighborhood through the task force.

Alexandria Pets Of The Week: A Dog Duo To Adopt Together

Modern slavery cases across Britain have rocketed during the pandemic, according to a leading charity.

The Salvation Army says it helped 2,662 survivors of slavery in England and Wales between July 2020 and June 2021, of whom 470 had been forced to commit crimes such as growing or dealing drugs, begging and shoplifting.

That’s an increase of 62% on the previous year.

“Unfortunately as a result of the pandemic we have seen a significant increase in the number of individuals referred into the national referral mechanism as a result of criminal exploitation ,” said Emilie Martin from the charity.

“This can be seen through county lines, forcing people into ‘cuckooing’ apartments, begging and forced begging.

“And we have seen an increase in this as a result of the pandemic.”

The Salvation Army believes the economic and mental health impact of the pandemic could be to blame for the significant rise in the number of people targeted by criminals looking for “slaves”.

The charity filmed an interview with “Dan”, a young man in his 20s who they helped after he had been forced into modern day slavery by a man who had initially befriended him.

“It’s difficult to say that I was a slave,” says “Dan”. “It’s terrible, it feels terrible.”

The man began by buying him meals and giving him cash, but suddenly announced that “Dan” owed him £50,000 and would have to start doing everything he told him to.

“He was taking money off me all time,” he said. “It was never ending. He beat me.

“He threatened my mother, something no man or woman wants to hear.

“He made me sell drugs. It got so bad that I tried to commit suicide.”

The ordeal only ended when “Dan” got arrested and police quickly figured out that he was a victim of modern day slavery and released him.

The pandemic may have changed circumstances for many people, but it seems criminal gangs have used it as an opportunity to keep making money out of other people’s misery.

The incident happened that evening at the business on Roosevelt Boulevard where police said they saw 100 juveniles causing damage inside the building, ABC 6 reported Sunday.

Video footage showed the group walking through the aisles as several items flew through the air. In the distance, a woman was seen standing above everyone else and appeared to be twerking with her arms raised as those below her watched:

A large group of criminals ransacked a WaWa store tonight in Philadelphia pic.twitter.com/bviiexZJR2

The store was left trashed, with items all over the floor, as the group gathered in the parking lot outside.

A resident told ABC 6 she feels hesitant when it comes to shopping at that location, saying, “Sometimes I’m afraid to stop, it’s a shame.”

Former employee Kaitlyn Holtzman also expressed her frustration, telling the outlet, “I was angry. I was very upset because being in the shoes of those employees, I know just how terrifying it is and how like frustrating it is having to clean up after that as well.”

In their letter, Sens. Marsha Blackburn (R-TN) and Bill Hagerty (R-TN) asked Biden to use those resources to fight the high rates of homicides and assaults, the outlet continued:

“Rampant crime is not inevitable — tough law enforcement can stop it,” Blackburn and Hagerty write. “But that requires a commitment to law enforcement.”

A recent report from the Philadelphia Inquirer indicated approximately eight people on average were shot every day in Democrat-controlled Philadelphia during the time period between Memorial Day and Labor Day this year.