Passengers can read newspapers directly or save them to their personal electronic devices to read anywhere, anytime. The steps are very simple: Just access the Vietnam Airlines mobile app, go to PressReader, and verify the booking code and itinerary information.

The list of publications will include more than 7,000 newspapers and magazines of various genres such as news, economics, tourism, sports, and entertainment in 70 languages, completely free of charge by Vietnam Airlines. This is a particularly attractive benefit as many electronic editions of newspapers and magazines normally may have subscription fees of up to $300 per year.

With this application, passengers can bring thousands of newspapers on board, including international publications such as Bloomberg, The Economic Times, and The Wall Street Journal, as well as Vietnamese newspapers and magazines such as Vietnam Investment Review, Giao Thong, Vietnam News, and Heritage.

The service is valid for 48 hours (24 hours before scheduled departure to 24 hours after the plane lands). Only downloaded categories can be stored indefinitely on the guest device.

“Launching the PressReader service is our new advance in digitalising services and enhancing the flight experience for passengers. Moreover, this will help Vietnam Airlines to reduce paper and the transport load of the aircraft, thereby contributing to saving resources and environmental protection,” said Trinh Hong Quang, executive vice president of Vietnam Airlines.

Such an entertainment service is an outstanding advantage when passengers fly with Vietnam Airlines. Currently, Vietnam Airlines passengers can enjoy a variety of movies, music, newspapers, and magazines through personal screens on Airbus A350 and Boeing 787 aircraft; as well as WiFi on the Airbus A321neo. 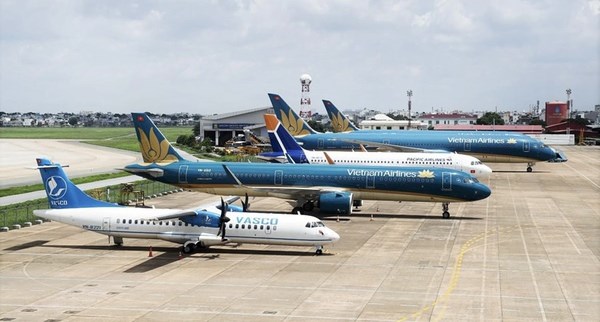 Tickets have been available on Vietnam Airlines’ website, mobile app and official ticket offices and agents nationwide from August 15.

Along with domestic flights, the carrier will increase flights connecting Vietnam and Asian countries such as Singapore, Thailand, Laos, Cambodia, the Republic of Korea, and those between Vietnam and Australia.

It plans to double its international flight number in the period amid the loosening migration regulations in many countries and territories.

The promotion is applicable for flights from January 14 to February 5, 2023./.

Tickets have been available on Vietnam Airlines’ website, mobile app and official ticket offices and agents nationwide from August 15.

Along with domestic flights, the carrier will increase flights connecting Vietnam and Asian countries such as Singapore, Thailand, Laos, Cambodia, the Republic of Korea, and those between Vietnam and Australia.

It plans to double its international flight number in the period amid the loosening migration regulations in many countries and territories.

The promotion is applicable for flights from January 14 to February 5, 2023.

T&Y SuperPort Vinh Phuc SC (T&Y) – a joint venture between YCH Group and Vietnamese conglomerate T&T Group – inked two MoUs with VNA and VNR on August 12 to embark on the first multimodal connectivity partnerships for the first-of-its-kind smart logistics infrastructure project in Asia – Vietnam SuperPort – that is slated for completion by 2025.

Vietnam SuperPort is the first multimodal infrastructure project invested in by a Singaporean firm in Vietnam. The project is expected to strengthen logistics and supply chain connectivity in the ASEAN region with the adoption of technologies and innovative solutions and driven by the strong economic ties made possible by the close partnership between Vietnam and Singapore and the strong business connections between the two nations.

“YCH Group will continue to support T&Y by drawing on our experience and expertise in supply chain and logistics to develop sustainable multimodal smart logistics infrastructure across ASEAN, starting with Vietnam. Together, we remain committed and look forward to working closely with existing and new partners in bringing our common vision to reality. We are already a step closer,” Yap added.

The first MoU was signed with VNA, the state-owned national airline of Vietnam, with the intent to explore potential collaboration and partnerships to boost air transport and logistical support for Vietnam SuperPort. VNA is the first airline secured by T&Y to operate in Vietnam SuperPort.

The tie-up aims to bolster Noi Bai International Airport’s capabilities to meet the projected increase of air cargo and act as an export hub to cater for the increasing demands of the nation’s manufacturing and assembly operations. Other partnership areas include supporting VNA in air cargo management while tapping into YCH Group’s global customer network. The two sides will leverage both parties’ network of customers to promote Vietnam SuperPort’s facilities and enhance multimodal cargo transportation in Vietnam.

Separately, T&Y signed a collaborative MoU with VNR to explore various areas with the enhancement of rail connectivity for Vietnam SuperPort as the focal objective. The partnership aims to enhance rail connectivity with existing and new rail networks by developing new stations and terminals to serve the SuperPort.

The two sides also seek potential investors to co-explore the extension of rail connectivity beyond Vietnam to Kunming – the capital of Yunnan Province in China – under a public-private partnership arrangement.

Another goal is to develop new multimodal business opportunities that will proliferate the advantages of rail freight transportation to support and enhance the smart-city supply chain and alleviate logistics challenges. 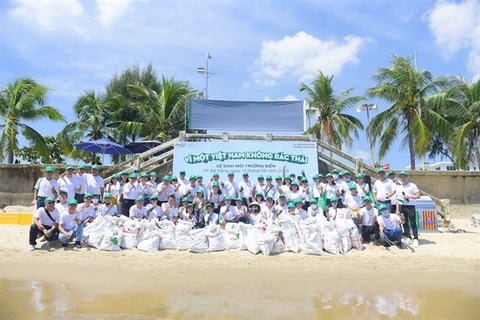 Collecting waste along the beach is among the programme’s primary activities. —Photo Coca-Cola Viet Nam

Coca-Cola Vietnam, in partnership with Da Nang City, has launched a “For a Viet Nam without Waste” event in the city’s Lien Chieu District.

The event, joined by representatives from agencies and the local community, is one of the activities organised by Coca-Cola Vietnam and local authorities in Da Nang and HCM City under the “World Without a Waste” vision.

With many activities over a half-day, the “For a Vietnam Without Waste” event aims to raise public awareness of waste sorting, encourage people to use reusable bags, and promote a green lifestyle and sustainable production and consumption.

To attract families and young people to join hands to collect plastic waste for recycling purposes, the event encourages attendees to bring used plastic bottles to exchange for their favourite Coca-Cola products.

These bottles and cans collected at the event will then be hand-made into lanterns for local underprivileged children, thanks to the Women Union and the Youth Union of Hoa Minh Ward.

Attendees can also enjoy an exhibition of winning projects in “A New Life of Waste” contest finale, where the most outstanding and practical recycling ideas are demonstrated.

To “Refresh the world,” Coca-Cola Vietnam has pursued sustainable development and comprehensive growth for almost 30 years.

“We hope that the ‘For a Vietnam Without Waste’ event can contribute to the joint effort of Da Nang and HCM City authorities to raise more awareness and build sustainable consumption habits for the community.

Le The Nhan, Vice Chairman of the People’s Committee Lien Chieu District, said: “Plastic waste is a collective issue to be solved collectively by the community. Therefore, we acknowledge and welcome Coca-Cola Vietnam’s efforts to protect the Da Nang living environment through practical initiatives like today’s event.”

“This is an excellent example of how public and private sectors together can raise public awareness and call for good action to make Da Nang the most worth-living place in the country, and a city without waste.”

The event “For a Vietnam without Waste” is the latest initiative toward a World Without Waste vision of the Coca-Cola Company.