This is a framework cooperation oriented-agreement, aiming to assist Thua Thien Hue to achieve socio-economic development goals for the 2021-2025 period, thus addressing challenges facing of the local economy by digital technology, and speeding up digital economy and digital society.

The MoU covers contents related to cooperation orientation principles; goals and areas of cooperation; establishment of foundation for strategic dialogue; development of joint action plans for projects; sharing knowledge, ideas and experience and engaging in dialogues with stakeholders.

Under the MoU, the ADB will give periodic consultations to the local authorities within the framework of the national program between the Ministry of Planning and Investment, the Ministry of Finance and relevant ministries and sectors.

Thua Thien Hue is one of the provinces in the central key economic region, a high quality multi-field education and training center, and an intensive medical center of the region and the country.

Nepal has opened its rivers, which it sees as having a combined potential to generate more than 42,000 megawatts of hydroelectric power, to foreign players to develop its economy and export electricity to narrow the trade deficit of more than $13 billion.

Nepal has signed a pact with an Indian company
NHPC

to develop a hydroelectric plant in the west of the nation years after a Chinese firm backed out, officials said on Thursday.

Nepal has opened its rivers, which it sees as having a combined potential to generate more than 42,000 megawatts of hydroelectric power, to foreign players to develop its economy and export electricity to narrow the trade deficit of more than $13 billion.

signed a memorandum of understanding (MOU) on Thursday allowing it to study details like feasibility, environmental impact, inundation of land and construction costs for two projects – West Seti (750 megawatts) and SR 6 (450 megwatts).

Both plants are to be located on the West Seti River in Nepal’s least developed far western region.

China ‘s biggest hydropower developer, Three Gorges International Corp , was previously lined up to develop the West Seti plant, but Nepal scrapped the deal in 2017 amid haggling over the terms, officials said.

“After decades of delays we would not have plunged into another uncertainty,” chief executive officer Sushil Bhatta of the state-run Investment Board Nepal told Reuters.

“NHPC has a good track record of developing such projects in similar terrain in neighbouring areas in India and has the potential to ensure India’s market for electricity,” he said, adding that he hoped for more projects in the region.

“When we enter a project, we complete it,” he said.

India is already constructing a 900 MW hydropower project on the Arun River in east Nepal at a cost $1.04 billion.

China and India usually jostle for influence in Nepal.

Currently Nepal generates about 2,000 megawatts, or less than 5% of its total hydroelectric potential, due to a lack of funds, technical know-how and the absence of political consensus on how to develop the resource.

Cementing her cultural identity has been something Amokura Panoho has been able to tick off her list ahead of her move back to the big smoke.

The Maori business advocate says re-connecting with her whakapapa was a real drawcard when she moved back to Waitara in 2006.

The icing on the cake came last month when she took to the stage at the Taranaki Tu Mai Festival in Urenui with Te Atiawa to perform kapahaka.

By the end of the year, Panoho will be living back in Auckland, a move prompted by her husband’s ill-health.

But the last decade of her life  back in Waitara has proven not only to be culturally enriching but professionally stimulating as well.

“It was good for me to be able to test my skills to see how good they were,” she says.

Born and bred in New Plymouth, Panoho left Taranaki in her teens but she always had the dream to come back.

She described her return as a “breath of fresh air” where she was able to spend quality time on her marae, tea towel in hand and chewing the fat with her whanau.

“The first few years were like a honeymoon phase.  It was wonderful,” she says.

The main reason for the delay in coming home revolved around the educational needs of her five children. All of them have attended and graduated from the total immersion Te Kura Kaupapa Maori o Hoani Waititi Marae in West Auckland.

Panoho says she wanted to make sure her children were given the gift of  Maori language, something she and her own husband did not get themselves.

“We missed out on it so we didn’t want our kids to miss out on it too.”

Not long after her return almost ten years ago, she kick-started her business by knocking on Venture Taranaki’s doors in the hope she might be able to contribute something to the economic development agency.

And a decade later, she thinks she has been able to do just that with her efforts helping put Maori aspirations on to Taranaki’s economic landscape.

It began in 2008 when she worked alongside Tui Ora to develop and launch the region’s first report on the Maori economy and ever since Panoho has been a champion for indigenous business interests.

Panoho, who affiliates to several iwi groupings including Ngaruahine, Ngati Mutunga, Taranaki and Te Atiawa, says the biggest difference between Maori and non-Maori entrepreneurs was their level of confidence.

“The difference between them and someone else is energy and confidence in their ability to get their product to market because there can be so many barriers in the way,” she says.

Panoho’s own career began in the union movement.  With many of her own whanau working on the wharves, in forestry or in the meatworks, it seemed liked a natural fit.

She joined the New Zealand Public Service Association in 1982 and went on to become its first Maori woman organiser.

She has served as chair of the New Zealand Maori Tourism board and is the creative director of iStudios Multimedia Company,  where she has helped produce music videos for Waitara reggae group Soulovus and published the quarterly Whenua publication for Parininihi ki Waitotara.

These opportunities are just some examples of the “the bedrock of creative talent”  she says she has been able to work with during her time in Taranaki.

It was her work with the Department of Social Welfare in the late 1980s where she was first introduced to the concept of community development, an idea she has been able to implement in the various roles she taken on.

“I saw the way in which communities could come up with the solutions.”

She says she has been proud of how she has helped put Maori economic development on the region’s agenda and developed a sense of what success for indigenous business practices could look like.  Opportunities in Taranaki are also attracting other talented Maori home, she says.

“I’m really proud to see the renaissance that is going on back here.”

Over the years, she has also dipped her own toes into the political well. In 2014, she was one of several Maori Party candidates to put their names forward to replace then retiring MP Dame Tariana Turia, but eventually lost out to Chris McKenzie.

Along with her role as national secretary for the Maori Party, she also sits on the Kawe Tutaki panel, an advisory group set up to inform the government about the needs of Parihaka. Panoho has been chair of the Parihaka Papakainga Trust since 2009.

While she would not like to see the sacred settlement turn into “another Whakarewarewa”  – a tourist village in Rotorua which showcases Maori culture –  it is a  place which sets Taranaki apart from any other place around the country and world, given its history and tradition.

“We’ve got a plethora of rich stories to tell,” she says.

“It’s a blank canvas, a blank page that still needs to be developed and tapped into,” she says. 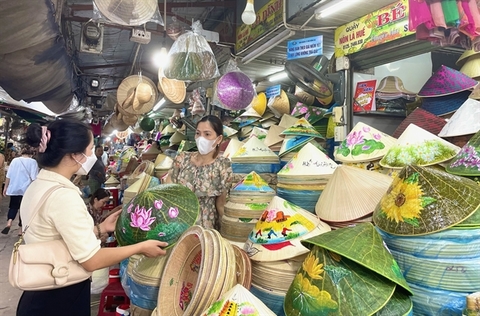 The People’s Committee of Thua Thien-Hue Province and the Asian Development Bank (ADB) in Viet Nam have signed a Memorandum of Understanding (MoU) on promoting a strategic partnership for inclusive and sustainable economic development.

This is a framework cooperation oriented-agreement, aiming to assist the province to achieve socio-economic development goals for the 2021-25 period, thus addressing challenges faced by the local economy through digital technology, and speeding up digital economy and digital society.

Under the MoU, the ADB will give periodic consultations to the local authorities within the framework of the national programme between the Ministry of Planning and Investment, the Ministry of Finance and relevant ministries and sectors.

Thua Thien-Hue is one of the provinces in the central key economic region, a high quality multi-field education and training centre, and an intensive medical centre of the region and the country. — VNS

This year’s expo, with the theme “Growing Forward Together,” will take place at the Saigon Exhibition and Convention Center.

It is expected to provide a great opportunity for Vietnamese travel agencies to recover and develop after the COVID-19 pandemic while connecting them with international partners and customers.

1,500 international delegates from travel agencies and brands, airlines, hotels, and resorts both at home and abroad have registered to attend the expo.

Currently, the expo has 260 registered booths, and 210 among them are from foreign countries.

The organizers have invited 160 international partners from 18 countries and territories such as the U.S., Australia, the U.K., France, Germany, Italy, Russia, Romania, Poland, Japan, the Republic of Korea, India, Thailand, and Singapore to join this year’s event.

Within the framework of the expo, there will also be a high-level conference on tourism development policy with the participation of representatives of countries in the Lower Mekong Region, India and Cuba; the Vietnam MICE Tourism Forum, and the Vietnam Night – Gala Dinner themed “The Essence of Vietnamese Rice,” to name but a few.

In addition, a series of workshops about major and potential tourism markets, digital transformation in tourism, and tourist attractions, will be held.

According to Nguyen Thi Anh Hoa, Director of the Ho Chi Minh Municipal Department of Tourism, ITE HCMC 2022 will constantly improve its scale and quality to partly contribute to promoting the recovery of tourism in Vietnam and the region. Notably, the World Travel Awards’ selection of Ho Chi Minh City as the venue for the Asia and Oceania Awards Ceremony on the eve of the opening of ITE HCMC 2022 has affirmed the city’s position in the global tourism map, she added.