Consumer sentiments have improved in January by 3.9% after a dip in December when it fell by 4.5% to 57.6, though the recovery is somewhat hesitant, the Centre for Monitoring Indian Economy said.

“We call the recovery seen in the early data of January as hesitant because after that 6.9% increase in the week ended January 2, the weekly growth rate fell to 2.1% in the next week and then by 3% erasing much of the gains made in the preceding two weeks,” CMIE said in its weekly labour market analysis.

According to CMIE, while the level of the index in the latest week ended January 23 and also the 30-day moving average are impressive at 61.2 and 61 respectively, the week-to-week variations reflect some uncertainty of the January recovery.

“The index of consumer sentiments in January is expected to cross its December level of 57.6 and and could possibly cross its peak level of 60.3 reached in November,” it said, adding that the index still has a long way to go before it reaches its pre-Covid levels of around 108

The data further showed that the index of current economic conditions went up by 6.3% to 58.2 and the index of consumer expectations grew by a modest 2.5% to 60.9.

“A faster improvement in current economic conditions with a slightly higher confidence in the future as is seen in the weekly sentiments data for January 2022 is a good development. Its stride needs to be bigger and a little more confident,” CMIE added. 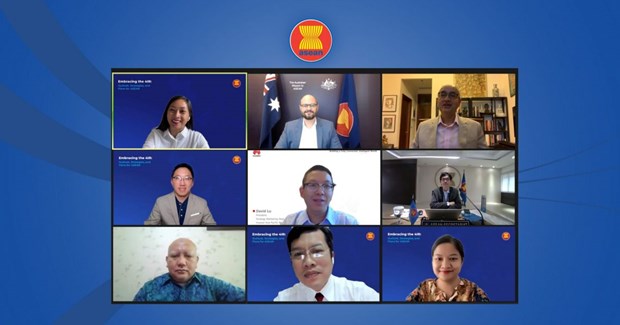 At the webinar (Photo: https://asean.org/)

Jakarta (VNA) – The ASEAN Secretariat on January 26 held a webinar to discuss the Consolidated Strategy on the Fourth Industrial Revolution (4IR) for ASEAN which was recently adopted by the ASEAN Leaders at the 38th Summit in October 2021. ASEAN Community intends to progress digital transformation and embrace new technologies in a comprehensive manner, for the benefit of ASEAN economy and the wider society. 4IR Strategy in recommendations to promote gender equality, as well as equality for people with disabilities and other marginalised groups. consolidated strategy was inclusive, involving all relevant sectoral bodies and broader stakeholders across the three pillars of ASEAN Community.

Last week it was announced that the rate of inflation had increased to its highest level in nearly 30 years. Now, economists are warning the news could have a knock-on effect to the level interest rates could reach in 2022. So, what are we likely to see happen in the next year? What other factors can affect interest rates?

What is the Bank of England base rate?

Currently, the base rate of interest is at 0.25 percent after the Bank of England voted to increase it last December.

Between March 2020 and December 2021, the rate had been maintained at a record low of 0.10 percent, following two cuts at the beginning of the Covid pandemic.

Readers should note the importance of the rate as it determines the level of interest that the commercial banks charge us on financial products, such as mortgages.

READ MORE: State pension to rise just £4.25 a week – you might get even less

Interest rates could be increased for the UK in 2022 in order to bring the cost of inflation down (Image: GETTY)

How is the Bank of England base rate set?

In a series of meetings, the nine members of the MPC, including Governor Andrew Bailey, debate and vote on what monetary policy action to take.

Typically, the decision they reach and the minutes of the meetings are published at midday on a Thursday.

The rate of inflation has now grown to its highest level for nearly 30 years (Image: EXPRESS)

Analysts then scrutinise these for clues that might suggest rate cuts or rises are on the way.

When is the next Bank of England interest rate decision?

February 3 2022 is the date for the next meeting which will decide the interest rate moving forward.

The Bank of England is keen to prevent inflation from rising any further, with its chief economist warning that more interest rate rises might be needed to curb inflation.

Typically when inflation starts to rise the purchasing power of your money falls simultaneously (Image: GETTY)

Konstantinos Venetis is a Senior Economist at TS Lombard – a macroeconomic forecasting consultancy with headquarters in London.

Speaking to Express.co.uk he said: “The BoE [Bank of England] looks poised to hike the policy rate to 0.5 percent next week.

“Although the persistence of high inflation is largely supply-driven, policymakers feel they can still ‘do their part’ by switching to a stance that does not stimulate demand as much.

“At this juncture, inflation scares are a catalyst for stepping away from what are still very loose monetary settings relative to how far the UK economy has come since the depths of the pandemic in 2020.

“In other words, BoE action is best viewed as overdue policy normalization rather than a tightening of financial conditions that will stifle real activity.

“The economy is set to slow in 2022, however wages have already started to fall in real terms, which should allow inflationary pressures to ease in the second half of the year.

“All this is consistent with a total of two or three rate hikes over the course of 2022 – less than what the market is currently pricing in – that take Bank Rate to 0.75 – 1.0 percent and pave the way for a reduction in the size of the Bank’s balance sheet as QE [quantitative easing] starts to unwind.”

What does the base rate mean for my money?

If interest rates are low, this makes borrowing cheaper.

Consequently, this encourages individuals and companies to borrow and spend more money.

In this scenario, the rate of inflation tends to rise, meaning the purchasing power of your money is falling.

Alternatively, if interest rates are high, people would rather save because they get a higher return and borrow less because it’s expensive.

Here, the rate of inflation is likely to fall which in turn means the purchasing power of your cash will remain relatively consistent.

The federal government is set to make its largest-ever investment in saving the Great Barrier Reef, announcing an additional $1 billion towards improving water quality, reef management and research.

The government hopes the funding will help protect more than 64,000 jobs and $6.4 billion in tourism dollars attached to the reef economy.

More than half of the funding will go towards improving water quality through remediating erosion, improving land condition and reducing nutrient and pesticide run-off.

Environment Minister Sussan Ley said the $1 billion package would be managed by her department and the Great Barrier Reef Marine Park Authority and would be delivered through local communities and industries, including traditional owners.

“Our farmers, tourism operators and fishers are our reef champions and we are supporting them through practical water and land-based strategies that will contribute significantly to the health of the reef,” Ms Ley said.

The federal government has faced calls to increase its efforts to preserve the Great Barrier Reef, since UNESCO warned last year it intended to list the reef as “in danger”.

The government successfully staved off an immediate listing , but the reef still faces the prospect of being listed as ‘in danger’.

The World Heritage Committee has asked UNESCO to undertake a monitoring mission but Sussan Ley said they have not yet visited Australia.

“I’ve written to UNESCO, I’ve invited the reactive monitoring mission to come and look forward to further correspondence indicating that they will visit,” she told the ABC.

“I look forward to the reactive monitoring mission coming to Australia and seeing for themselves how our reef communities are working hard are practising the strongest possible reef management.”

The federal government was also required to submit a report to UNESCO by next month that outlines how it is protecting the reef and Ms Ley said the report is on track to be sent soon.

The Great Barrier Reef Marine Park Authority’s chair has previously warned the health of the reef will continue to deteriorate without climate action.

Prime Minister Scott Morrison said the Great Barrier Reef was “the best-managed reef in the world”, and the new funding was on top of $2 billion already invested in its sustainability plan.

“We are backing the health of the reef and the economic future of tourism operators, hospitality providers and Queensland communities that are at the heart of the reef economy,” Mr Morrison said.

The government said it would direct scientific research funding to projects such as coral seeding, reef stabilisation, the development of heat-resistant coral and climate adaptation work with turtles and other marine species.

Australia stopped the Great Barrier Reef being listed as ‘in danger’ – what happens next?

IIFL Securities estimates real GDP growth in FY23 to be 7.4 per cent and given recent trends, there can be upsides to this

The upcoming Budget 2022 is expected to have a significant thrust on capital expenditure, job creation and support for weaker sections that have been much affected due to this K-shaped recovery from Covid-19 related disruptions. There is sufficient fiscal space available in the budget for these priorities.

One-off revenue expenditures in FY22, should not recur next year:
In FY22, the government has had to step-up free foodgrain distribution and other Covid-related spends, as the Delta wave battered the Indian economy. It had also announced additional subsidy on fertilisers. Some rationalisation of such subsidies can be expected in the upcoming budget, opening up fiscal space for more productive capex. The finance minister had initially budgeted around 1.5 per cent of GDP towards such subsidies for FY22. However, with additional spends, this number is expected to inch up to 2.3 per cent. For FY23, if it reverts to usual levels, some fiscal space could pen up here, in the 0.8-1 per cent range.

Formalisation trend to continue, tax collections to stay buoyant:
Tax collections have been buoyant so far this year, substantially ahead of budget estimates (BE). Inter alia, this is due to strong corporate earnings growth profile (for instance, Nifty is expected to register over 15 per cent earnings growth between FY22 and FY24) and increasing formalisation. These trends should continue.

High growth trend to continue in FY23:
We estimate real GDP growth in FY23 to be 7.4 per cent and given recent trends, there can be upsides to this. According to the IMF and the OECD, FY23 real GDP growth may be in excess of 8 per cent. This is partly because of the waning impact of Covid-19 related disruptions with each successive wave, and improving business confidence. Nominal GDP (NGDP) growth for FY23 should be > 14 per cent.

High NGDP growth for FY22 to amplify FY23 spending:
Further, as per current advance estimates, nominal GDP for FY22 is expected to grow at 17.6 per cent YoY which is higher than BE. This relatively high growth will provide a bigger base for FY23 GDP implying that YoY spending line item numbers for FY23 will be higher than usual.

Significant spillover of disinvestments to FY23 to increase fiscal space for next year:

On disinvestment receipts, there has been a significant lag in achieving the targets set by Budget-2021. However, on the positive side, much groundwork has been completed for several targets disinvestments e.g. in LIC, which is expected to fetch around Rs 800 billion-Rs 1 trillion. Hence, this spillover will release some fiscal space for FY23.

(Disclaimer: The author is Chairman of IIFL Securities . The opinions expressed in the article belong solely to the author)

Pick the best companies to invest

Pick the best stocks for yourself
Powered by