A legal challenge to the provisional approval for the Pfizer Covid-19 children’s vaccine has failed.

On Friday a judge at the High Court in Wellington issued his decision, dismissing the claim of eight people, whose names were suppressed in the meantime.

They challenged the decision of the Minister of Health to provisionally approve the vaccine for children aged five to 11 years, and Cabinet’s decision on December 20 to roll out the voluntary vaccination process from January 17.

Justice David Gendall said the decisions complied with the law and the court shouldn’t substitute its own views for decisions made on scientific and medical merits.

The judge also dismissed a claim that Cabinet’s decision was made for an improper purpose or was pre-determined.

The eight applicants had sued the Minister of Health, the group manager of the Medical Devices Safety Authority (Medsafe), the Minister of Covid-19 Response, and drugmaker Pfizer. Medsafe is a business unit of the Ministry of Health.

The applicants were parents of children in the age group that became eligible to have the vaccine, and they thought the decisions put at risk the welfare and wellbeing of children, the judge said.

The health minister delegated the decision-making to Medsafe’s group manager Chris James who assessed the therapeutic benefit and risks.

The paediatric vaccine contains one-third of the amount of the active ingredient of the original dose.

In his evidence for the case James said he reviewed the increasing medical and scientific literature about Covid-19 vaccines before and during the consent process.

He also referred the issue to the Medicines Assessment Advisory Committee, whose members unanimously recommended consent.

A separate technical advisory group also considered the vaccine and reported to the director-general of health. The then Director-General, Dr Ashley Bloomfield, accepted the group’s advice to offer the vaccine free of charge to children five to 11.

The applicants had their own evidence weighing the risks and benefits of the vaccine.

The judge said that, as he saw the position, it was not his role when reviewing the process, to decide which experts were right or form his own view on whether the paediatric vaccine should be supplied in New Zealand.

Generally weighing the benefits and risks of the vaccine, and the desirability of it being available in New Zealand, were matters for James as the minister’s delegate.

It was clear from the evidence that James had applied the proper legal test, and that the safety and efficacy of the vaccine was “closely scrutinised” before James made his decision, the judge said.

“Overall, I am satisfied that Mr James’ decision is one which is well-supported by the Crown expert and other evidence provided to the court,” the judge said.

He rejected claims that the vaccine was approved for children to protect older adults, that James’ decision was pre-determined, or he simply “went through the motions”.

It seemed the applicants were also mistaken about the government’s contracts with Pfizer.

The court found Google misled some customers about personal location data collected through their Android mobile devices between January 2017 and December 2018.

Google mislead users into believing “location history” setting on their android phones was the only way location data could be collected by it, when a feature to monitor web and applications activity also allowed local data collection and storage, the Australian Competition & Consumer Commission (ACCC) said.

The watchdog, which estimates that 1.3 million Google account users in Australia may have been affected, had started the proceedings against the company and its local unit in October 2019.

Google did not immediately respond to a Reuters request for comment.

The search engine giant has been embroiled in legal action in Australia over the past year as the government mulled and passed a law to make Google and Meta Platforms’ Facebook pay media companies for content on their platforms.

When it comes to smart casual, Louise Redknapp reigns supreme. The star’s go-to throw-on outfit is always jeans and a sleek shirt, meaning her wardrobe is lined with laid-back yet alluring ensembles. Her latest look to enchant? You guessed it – a satin shirt and boyfriend jean combo.

Louise, 47, looked sophisticated in Toteme’s ivory-printed ‘Embroidered Silk-Twill Shirt,’ which costs a grand total of £500, which she paired with some dark wash boyfriend jeans by R13. She completed her designer aesthetic with a Gucci belt, a Skims sports bra and some black point-toe heels by Jimmy Choo.

The singer wore her caramel tresses down loose in a straightened style and showcased a natural beauty blend. A flawless complexion, a dusting of blush and some sun-kissed contour made for a radiant makeup look.

Louise took to social media to share her luxury ensemble with fans online. She captioned the playful clip: “Open up Pandora’s Kiss… This is one of my favourite looks this summer…Shirt: @toteme Sports Bra: @skims Belt: @gucci Denim: @r13 Shoes: @jimmychoo Jewellery: @roxannefirst.”

Friends and followers couldn’t get enough of the star’s effortless outfit and rushed to compliment her sartorial skills. “Gorgeous,” one fan commented, while another said: “Wow stunning.” A third agreed, penning: “Looking fabulous Louise,” and a fourth added: “Always so stylish.”

The star posed in the boyfriend jeans and heels

If you’re in the mood for some style self-care, then it certainly seems like a day to treat yourself. Louise’s designer shirt is still available to buy online, and with its timeless appeal, it’s sure to become a cherished forever piece.

However, if you love Louise’s shirt but the price tag isn’t so tempting, then why not try this elegant alternative?

This satin shirt in a cream-coloured check can be teamed with some casual black trousers and chunky Prada-esque heeled loafers for a preppy yet polished look.

HELLO!’s selection is editorial and independently chosen – we only feature items our editors love and approve of. HELLO! may collect a share of sales or other compensation from the links on this page. To find out more visit our FAQ page .

BRITAIN is at “exceptionally high” risk of wildfires as a 36C heatwave hits this weekend, the Met Office warned.

The risk of fires in parts of England and Wales on Sunday has increased from “very high” to “exceptional” on the Fire Severity Index.

This means most of southern England – as far west as Abergavenny in Wales – is at the highest level on the Met Office’s scale.

The latest alert follows their recent amber weather warning of extreme heat in place since yesterday until Sunday.

Today the country is set to bask in glorious 30C weather as the country overtakes holiday destination Hamilton, Bermuda , which sent the mercury to 29C on Wednesday.

Yet thermometers could peak at 36C in some areas on Saturday – so weather and fire experts are being cautious of the wildfire risk. 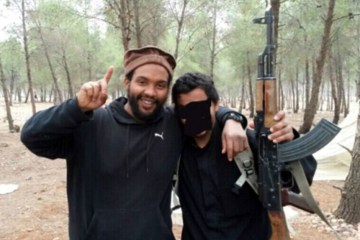 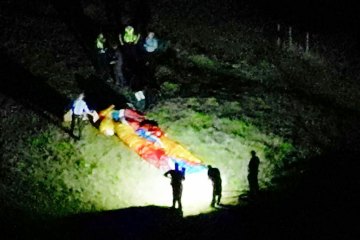 Met Office meteorologist Marco Petagna told the PA news agency: “The risk is very high across much of central, southern and eastern England.

“Going into Friday and the weekend, it starts to increase further, going into the highest category of exceptional risk.”

In the past few weeks wildfires have broken out across the UK where dry grass and woodlands have caught alight.

Mark Hardingham, the chairman of the National Fire Chiefs Council (NFCC) told The Telegraph said the summer heat has been unlike any other over his entire 32-year career in the fire service.

He said: “We’re not going to see temperatures as hot as we saw three weeks ago, but that doesn’t matter because the ground couldn’t get any drier than it already is.”

Mr Hardingham added: “The wildfires are as prevalent in semi-urban areas as they are in rural communities so it’s difficult to know where the next one will be.”

The UK Health Security Agency has also released a Level 3 Heat Health Alert for southern and central England lasting until 6pm on Saturday.

Officials have warned Brits to look after each other in the fierce heat of the next few days.

Those in the hottest areas should take care to stay hydrated, close their curtains and avoid wildfire smoke.

The risk of fires is so high because southern England had experienced its driest July since records began in 1836 , according to the Met Office .

South-East and central southern England had an average of just 5mm (0.2ins) of rain last month, while East Anglia had only slightly more with 5.4mm (0.21ins).

Hosepipe bans have also been enforced across the country affecting millions as water companies scramble to save supplies.

Brits in certain areas are forbidden from using hosepipes to water gardens or clean cars, and ornamental ponds and private swimming pools must remain empty.

But river flows and groundwater levels could even remain low for the next three months, the UK Centre for Ecology and Hydrology warned.

Mr Petagna from the Met Office said that rain could be on the horizon early next week.

He said: “There are signs that we could get some rain next week, but details at the moment are uncertain.

“What we really need is a few weeks of light rain to soak into the ground.

“Thunderstorms are more likely to cause some flooding issues because the ground is hard the water can’t sink in.”

At the end of last month, a massive wildfire erupted in Suffolk just hours after fire crews tackled a series of enormous blazes across London and Surrey.

How hot does it have to be to legally leave work?

Knodishall Common in the east of the coastal county was engulfed by flames on Sunday evening – sending black smoke billowing across the area.

To avoid more wildfires, Brits have been advised not to light bonfires or have barbecues.

Australia’s competition watchdog said on Friday (Aug 12)  that Alphabet Inc’s Google unit was ordered by the country’s Federal Court to pay A$60 million ($58.4 million) in penalties for misleading users on the collection of their personal location data.

The court found Google misled some customers about personal location data collected through their Android mobile devices between January 2017 and December 2018.

Google misled users into believing “location history” setting on their android phones was the only way location data could be collected by it, when a feature to monitor web and applications activity also allowed local data collection and storage, the Australian Competition & Consumer Commission (ACCC) said.

The watchdog, which estimates that 1.3 million Google account users in Australia may have been affected, started the proceedings against the company and its local unit in October 2019.

In an emailed statement, Google said it had settled the matter and added it has made location information simple to manage and easy to understand.

The search engine giant has been embroiled in legal action in Australia over the past year as the government mulled and passed a law to make Google and Meta Platforms’  Facebook pay media companies for content on their platforms.