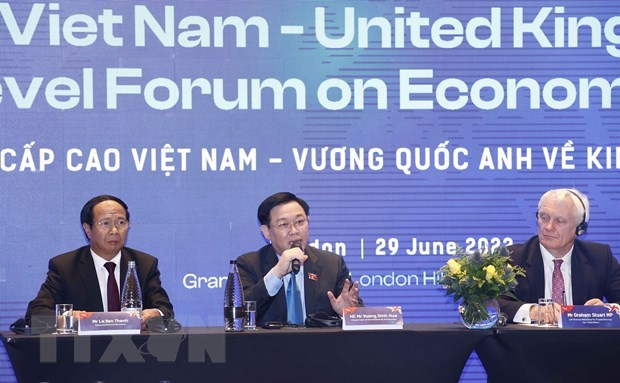 In an article about Vietnam’s trade and investment links with Italy and Europe, the La Città Futura newspaper said Vietnam is effectively implementing the commitments in the free trade agreements with the EU ( EVFTA ) and the UK (UKVFTA).

So far, key farm produce of Vietnam like peppercorn, cashew nut, vegetables, fruit, tea, and rubber have benefited from preferential tariffs in the EU, which is one of the five largest markets of Vietnam’s fishery products.

La Città Futura noted Vietnam is a leading partner of Italy in Southeast Asia and also a helpful bridge linking the EU, including Italy , with the Association of Southeast Asian Nations (ASEAN).

Citing the phone talks on April 22 between Vietnamese Prime Minister Pham Minh Chinh and his Italian counterpart Mario Draghi, it emphasised the Italian Government’s pledge to promote the Italian parliament’s ratification of the EU – Vietnam Investment Protection Agreement (EVIPA) amid many enterprises of the country wishing to expand operations in the Southeast Asian nation.

Meanwhile, the Marx21 daily underlined that with the second candidacy for membership of the UN Human Rights Council (HRC), Vietnam is showing its right policies on human rights development that centre on people.

It said one of Vietnam’s internationally recognised achievements is poverty reduction and social security safeguarding.

As an HRC member during 2014 – 2016, the country fully and responsibly participated in the council’s activities and agenda. Its Government always affirmed efforts to protect and promote human rights and also contributed many initiatives to help deal with global human rights issues.

That ASEAN countries unanimously selected Vietnam as the Southeast Asian candidate for an HRC seat in the 2023 – 2025 tenure reflected the bloc’s consensus and trust in Vietnam in this regard, according to Marx21./.

HANOI, July 3 (Vietnam News/ANN): Vietnam Prime Minister Pham Minh Chinh has ordered faster administration of the third and fourth doses of Covid-19 vaccine as part of measures against the unpredictable pandemic situation, especially when the sub-variant BA.5 has appeared in Vietnam and raised the risk of a new wave of coronavirus infections.

According to the Government Office, to enhance pandemic control and create favourable conditions for socio-economic recovery and development, the Government leader has assigned Deputy PM Vu Duc Dam to continue directing the Ministry of Health, other ministries and sectors, and 63 provincial-level localities to drastically carry out anti-pandemic measures, especially accelerating Covid-19 vaccination.

He asked the Health Ministry and the chairpersons of the provincial-level People’s Committees to speed up the inoculation, particularly administering the third and fourth doses to people aged 12 and above, and the two primary doses to children aged 5 – 11 in a safe, scientific and effective manner.

He also requested sufficient and timely provision of medicine and medical supplies for the Covid-19 combat, as well as health examination and treatment.

Meanwhile, the Ministry of Information and Communications was ordered to work with the Health Ministry and media agencies to boost communications to raise public awareness of the unpredictable pandemic situation and the Omicron sub-variant BA.5 so that people will support Covid-19 vaccination and continue practicing anti-pandemic measures. – Vietnam News/ANN 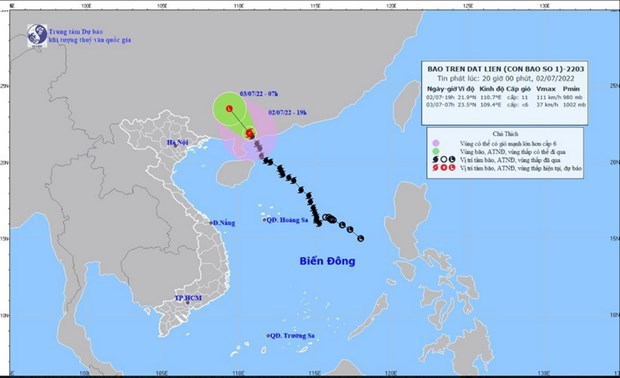 Hanoi (VNA) – Typhoon Chaba weakened into a tropical depression on July 3 morning, moving north of northwest with its eye located in the south of China’s Guangxi province, which borders northern Vietnam.

At around 4am, its wind speed fell to below 39km per hour, according to the National Centre for Hydro-Meteorological Forecasting (NCHMF).

The north-western and north-eastern provinces should expect scattered thunderstorms and downpours, with rainfall from 10 – 30mm, and even 50mm in some locations, on the July 3 evening and night.

From July 4 – 7, the north will be likely to see heavy rain , the NCHMF forecast, adding that there is the possibility of tornadoes, lightning, hail and strong winds.

The mountainous northern provinces are at risk of being struck with flash flood and landslides, it said. Flooding is also expected at low-lying areas./. 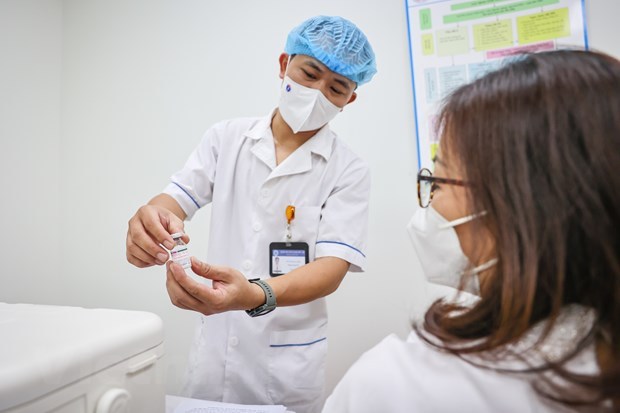 COVID-19 vaccination (Photo: VNA)
Hanoi (VNA) – Vietnam reported an additional 730 COVID-19 cases and no death on July 2, according to the Ministry of Health.

The new infections brought the country’s total caseload to 10,748,127 since the pandemic broke out.

As many as 9,694 patients were declared to be free from coronavirus SARS-CoV-2 on the day, raising the total number of recoveries to 9,699,357.

Meanwhile, the death toll related to the disease was kept at 43,047, accounting for 0.4% of the total infections. 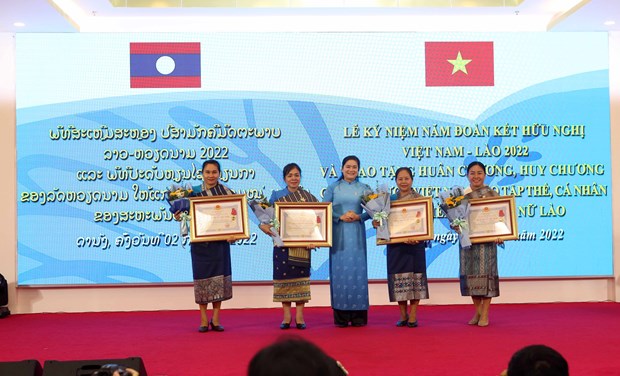 Collectives and individuals of the Lao Women’s Union receive orders and medals from the State of Vietnam at the ceremony in Da Nang city on July 2. (Photo: VNA)

Da Nang (VNA) – Orders and medals from the State of Vietnam were bestowed upon some collectives and individuals of the Lao Women’s Union (LWU) at a ceremony held in the central city of Da Nang on July 2.

The event was held by the Vietnam Women’s Union (VWU) to celebrate the two countries’ Solidarity and Friendship Year 2022.

On behalf of the President of Vietnam, the VWU presented the third-class Independence Order to three individuals, the third-class Labour Order to one collective, the Friendship Order to 15 collectives and three individuals, and the Friendship Medal to two individuals of the LWU in recognition of their major contributions to the traditional friendship, special solidarity, and comprehensive cooperation between the two Parties and States.

On this occasion, the two unions signed a cooperation agreement for 2022 – 2027, showing their wish and determination to promote relations via more practical and effective activities in the next five years.

So far, the VWU chapters in 15 Vietnamese localities have had cooperation deals and activities with 13 localities and partners of Laos. Their joint activities include sharing experience in women affairs, developing livelihoods and reducing poverty, providing vocational training and Vietnamese language teaching for female students and cadres of Laos, fighting against human trafficking and domestic violence, and encouraging members to help safeguard the borderline and border markers.

During their trip to Da Nang and nearby Quang Nam province, the LWU delegation visited some models of local VWU chapters./.