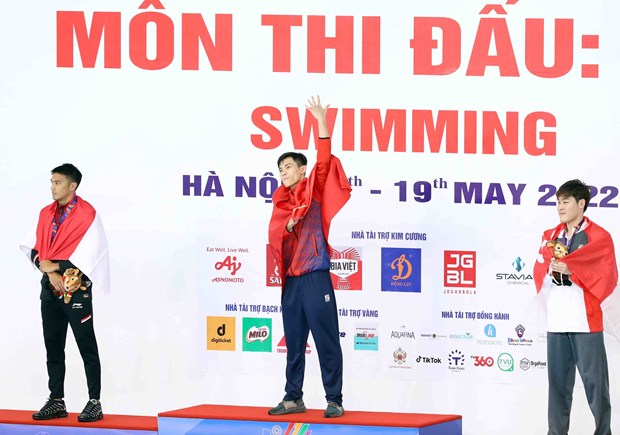 Hanoi (VNA) – Vietnam had claimed 125 gold, 76 silver and 74 bronze medals as of May 18 evening, the sixth official competition day of the ongoing SEA Games 31 , retaining the top position in the medal table.

The host country is getting closer to its set target of 140 golds.

Thailand ranked second with 53 golds, followed by the Philippines with 37.

On the day, the Vietnamese athletics team won three more gold medals in the women’s javelin throw, women’s 10,000m and women’s 4x400m, raising the number in the sport to 19 and surpassing the target of 15-17.

Runner Nguyen Thi Oanh obtained triple golds in the women’s 1,000m; 5,000m and 3,000m steeplechase, in which she broke her own record set in the previous SEA Games.

Swimmers continued to excite home fans as Ben Tre-born Pham Thanh Bao won the eighth gold for Vietnam in the men’s 50m breaststroke, beating strong rivals from Indonesia and Singapore. It was also his second gold at this year’s Games.

Previously, Nguyen Huy Hoang bagged a gold in the 1,500m freestyle, and triumphed and set a new SEA Games record in the men’s 400m freestyle.

Tran Huy Nguyen did the same in the men’s 400m individual medley.

On May 18 afternoon, Nguyen Thi Phuong secured a gold in the women’s individual kata in karate. Of note, it was the 1,000th gold medal for the Vietnamese delegation at the regional sporting events.

SEA Games 31, themed “For a Stronger South East Asia”, is being held in Hanoi and 11 neighbouring provinces and cities until May 23.

It features 40 sports with 523 events, attracting around 10,000 participants. The biennial event was initially slated for late 2021 but delayed due to the COVID-19 pandemic./. 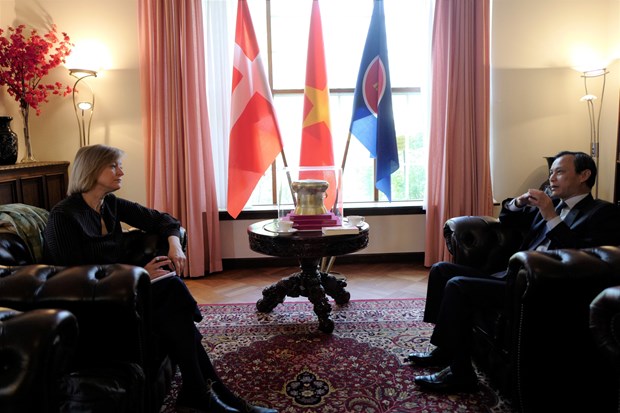 Hanoi (VNA) – Ambassador Luong Thanh Nghi has suggested the Vietnamese Embassy in Denmark and the Denmark-Vietnam Friendship Association (DAVIFO) coordinate with relevant agencies in organising forums for young people of the two countries to serve as nucleus for their bilateral ties.

The two sides should join hands in launching activities like cuisine festivals, photo exhibitions and dialogues between prestigious writers and artists, and audiences to promote the Vietnamese and Danish cultures, he said at a meeting with DAVIFO President Trine Glue Doan on May 17.

The diplomat noted with pleasure the close coordination between DAVIFO and the Vietnam-Denmark Friendship Association under the Vietnam Union of Friendship Organisations (VUFO), with practical activities held in Hanoi, Da Nang, Ho Chi Minh City and other Vietnamese localities.

Vietnam always pays attention to improving living standards of its people, especially those in remote and disadvantaged areas, and vulnerable groups, he said, pledging that the embassy will support DAVIFO in activities aiming to raise material and spiritual life of Vietnamese people.

The embassy will also step up people-to-people exchange, cultural and educational cooperation, friendship and mutual understanding between  the peoples of the two countries, he continued.

Trine Glue Doan briefed Nghi on a number of DAVIFO projects in Vietnam, covering the supply of medical equipment to local hospitals and support to disadvantaged children.

According to the President, DAVIFO will mobilise capital to expand the projects to new fields like educational and cultural exchange by organising programmes featuring Vietnamese culture and arts, and opening Vietnamese cooking courses for Danish friends./.

Hanoi (VNA) – The Vietnamese Embassy in Cambodia on May 19 held an incense-offering ceremony to pay tribute to President Ho Chi Minh on his 132nd birthday.

In his remarks, Ambassador Nguyen Huy Tang called on the embassy’s staff and Vietnamese people in Cambodia to follow the late President’s ideology, morality and lifestyle.

They should seriously observe local law and support each other, he said, lauding Vietnamese firms and agencies in Cambodia for their support to Cambodia ns of Vietnamese origin and local people during the COVID-19 fight.

The Vietnamese community in Hungary and Hungarian friends on May 18 also gathered at a ceremony in Zalaegerszeg city where President Ho Chi Minh’s statue is located to pay homage to the late leader.

Góra Balázs, Chairman of the Hungarian Socialist Party’s Zalaegerszeg branch, recalled President Ho Chi Minh’s life and career, and affirmed that the President has passed down a great legacy for Vietnam and humankind in many aspects.

Highlighting the President’s trip to Hungary in 1957, Dr. Botz László, President of the Hungary-Vietnam Friendship Association, said it has laid a firm foundation for the good friendship between peoples of the two countries.

Ambassador Nguyen Thi Bich Thao expressed her delight at the continuous development of the comprehensive partnership between Vietnam and Hungary, and her hope for stronger bilateral relations, as well as the ties between Vietnam and Zalaegerszeg in economy, culture and people-to-people exchange.

On the occasion of President Ho Chi Minh’s birthday, a delegation of the Vietnamese Embassy in Thailand led by Ambassador Phan Chi Thanh visited Phichit where houses the Ho Chi Minh Museum.

This is one of the three relic sites dedicated to the leader in Thailand, along with others in Udon Thani and Nakhon Phanom.

Phichit’s Governor Paiboon Nabutchom recalled the President’s stay in the province during his search for national salvation and extended local residents’ respect to the beloved leader. The official also described the museum as a symbol of the friendship between Vietnam and Thailand.

Ambassador Thanh thanked the Thai government and Phichit’s authorities for building and turning the museum into a destination where visitors learn about President Ho Chi Minh as well as Vietnamese land and people.

Mimasaka is the first city in Japan to have President Ho Chi Minh’s statue, which is located at the centre of the Vietnam-Ho Chi Minh space in the Sakuto culture-art centre.

The statue is a special gift from Vietnam to authorities and people of Mimasaka.

The city’s Mayor Hagiwara Seiji noted his hope that the centre will serve as a venue where people come to pay tribute to the late President and learn about Vietnam’s history.

A statue of President Ho Chi Minh located in Acapulco Park, Havana has been considered the “Vietnamese corner” in Cuba.

With the statue, inaugurated in 2004, local residents have dubbed Acapulco Park as “Ho Chi Minh Park,” said Soraida González, a member of the Cuba-Vietnam Friendship Association’s branch in Acapulco ward.

Over the past 18 years, the association’s Acapulco branch has welcomed hundreds of delegations from Vietnam and many others from foreign countries who come to pay tribute to the President.

Li Ming Han, at his 80, said he has read a lot of books on President Ho Chi Minh , and published his own book portraying the leader in 2011.

He said not only Vietnamese but people across the world, especially Chinese, including his family, have great respect to the President and always remember his image./. 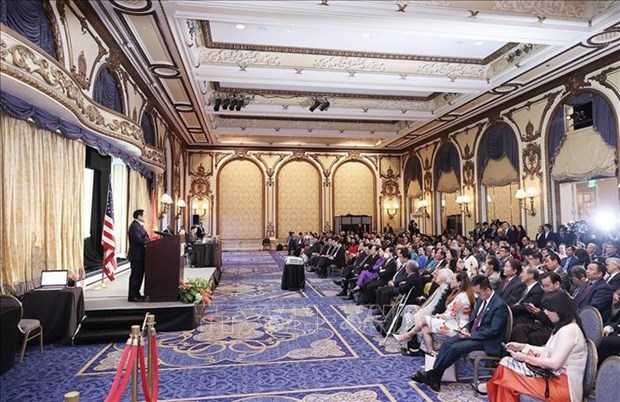 San Francisco (VNA) – Prime Minister Pham Minh Chinh has lauded overseas Vietnamese ( OVs ) in general and those in the US in particular for their contributions to the homeland as well as the Vietnam-US ties.

At a meeting with representatives of the Vietnamese community in San Francisco on May 17 (local time) as part of his trip to the US, Chinh noted that OVs have engaged in 376 projects in the form of foreign direct investment (FDI) with total registered capital amounting to 1.72 billion USD.

Remittances to Vietnam exceed 10 billion USD each year, hitting 12.5 billion US D last year, he said, stressing that the capital has played a role in the country’s socio-economic development.

The leader reiterated that the Party and the State have always regarded OVs as an integral part and an impulse for national development, which has been reflected in the institutionalisation of resolutions, directives and conclusions on OVs issues in legal regulations.

The PM asked Vietnamese abroad to preserve and promote the Vietnamese culture and make more contributions to the homeland, and urged representative diplomatic agencies to pay more attention to their material and spiritual life.

Chinh also commended OVs for their contributions during the combat against the COVID-19 pandemic at home.

He used the occasion to brief the expats on orientations, targets, solutions and achievements of Vietnam after 35 years of Doi moi (reform), as well as the country’s external relations, including the Vietnam-US ties and the ASEAN-US relations.

Expats expressed their delight at the socio-economic achievements Vietnam has recorded over the past time, especially in the COVID-19 fight, post-pandemic socio-economic recovery and international integration.

They raised proposals on streamlining investment procedures to make it easier for them to contribute to the nation.

In this regard, the PM assigned relevant agencies to acquire the opinions and take appropriate solutions.

This is the third meeting between the PM and Vietnamese in the US during his week-long trip.

Later the same day, PM Chinh and his entourage left San Francisco for Hanoi, concluding his trip to the US to attend the ASEAN-US Special Summit and make visits to the US and the United Nations./. 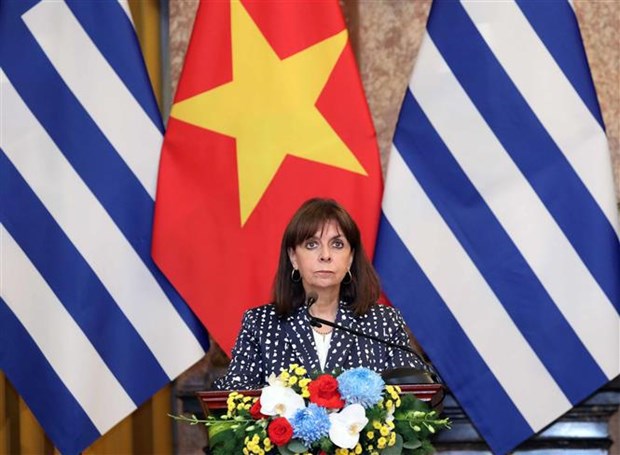 Welcoming the Greek President, Party General Secretary Trong affirmed that Vietnam attaches much importance to its traditional friendship with Greece and is delighted at the important progress in their bilateral ties. He gave a number of proposals to promote the partnership in all fields, and suggested Greece continue to support the Vietnam ese community in the country.

During talks between the two presidents, they shared delight that despite the impacts of the COVID-19 pandemic, trade between the two countries still increased to 447 million USD in 2021, up 33 percent year on year, and two times higher than the 15 percent growth in Vietnam-EU trade.

The presidents agreed to promote a win-win partnership, while encouraging and creating favourable conditions for businesses from both nations to strengthen exchanges focusing on areas of Vietnam’s demand and Greece’s strengths, such as shipbuilding, maritime logistics, energy and agriculture. In order to create a framework for bilateral economic cooperation, they agreed to increase negotiations for a double tax avoidance agreement and another on maritime transport.

In her meeting with the Vietnamese top legislator, President Sakellaropoulou pointed to the potential for bilateral cooperation in history and culture.

Her official visit took place in the context that the traditional friendship between the two countries is developing well. It is expected to contribute to strengthening political trust, and deepening multi-faceted cooperation in the fields of politics-diplomacy, economics, culture and tourism./.