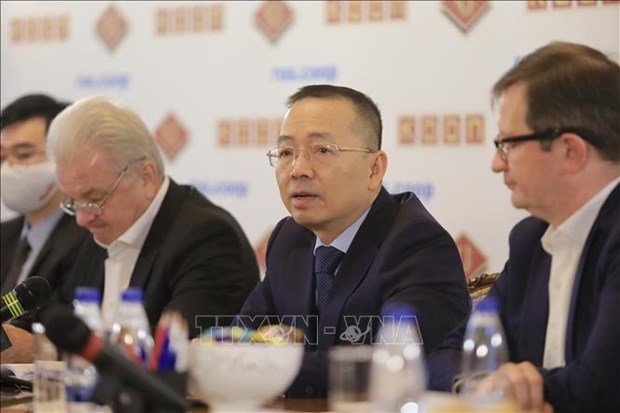 Moscow (VNA) – Vietnam ‘s Trade Counsellor in Russia Duong Hoang Minh has proposed the Russian Government consider exempting visas for Vietnamese tourists for 15 days, in the context that it has exempted visas for visitors from Laos and Thailand for 30 days.

Speaking at the third Saint Petersburg-Vietnam Tourism Forum, which was held in a hybrid format on May 17 within the framework of “Vietnamese days in Saint Petersburg”, Minh said that Vietnam always creates the most favourable conditions for Russian tourists such as offering a 15-day visa exemption for those to Vietnam and 30 days for those on direct flights to its Phu Quoc island.

He also noted that the two countries still have great potential in tourism cooperation, but have not yet taken advantage of all the possibilities for development, including attracting more Vietnamese tourists to Russia.

Deputy Director General of the Vietnam National Administration of Tourism Nguyen Le Phuc said that Vietnam has simplified many procedures to attract tourists to Vietnam, including those from Russia, such as visa exemption for different periods, and the gradual simplification or removal of quarantine measures.

Organising the event showed the two sides’ determination to promote tourism after the pandemic, Phuc stated, expressing his belief that the number of tourists to each country will increase in the coming time.

Speaking at the event, head of the international cooperation bureau under the Federal Agency for Tourism Demyan Olegovich and Vice Chairwoman of the Saint Petersburg Committee for Tourism Development Nana Gvichia Magrushevna affirmed that they will make efforts to meet the needs of Vietnamese tourists, and ensure security for them. 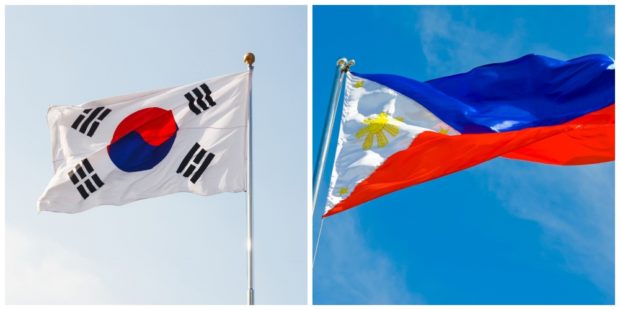 MANILA, Philippines — The South Korean Embassy in Manila announced that it will resume the issuance of tourist visas by June 1, 2022.

In a notice issued on Thursday, the embassy said “application and issuance of all types of visa, including tourist(C-3-9) will resume.”

The issuance of short-term stay visas for sightseeing and tourism purposes was suspended in 2020 amid COVID-19 pandemic restrictions.

According to the embassy, detailed information regarding the visa application procedure will be announced soon.

Meanwhile, multiple entry visas issued before April 5, 2020 which have yet to expire “may be used without re-application,” the embassy added.

Further, the embassy said a “Submission of Consent for Isolation will no longer be required.”

In March, the Korea Tourism Organization announced that visitors to South Korea who have already been fully vaccinated against COVID-19 will be exempted from mandatory quarantine.

The inflow is rising rapidly as Department of Homeland Security (DHS) Secretary Alejandro Mayorkas exempts more Cubans from the Title 42 bar against migrants.

The Cuban-born Mayorkas allowed 36,628 Cubans to enter in April, up from 16,547 in February and 8,158 in December. The vast majority of Cubans are working-age adults and are allowed to get work permits by simply asking for asylum — even though they are economic migrants.

The Biden inflow is greater than the 125,000 Cubans who flooded into the United during the 1980 “ Mariel Boatlift .”

The inflow is expected to rise after Biden’s deputies agreed to help Cubans in the U.S. to send more money back to their relatives stuck on the island.

The May 16 economic agreement is good news for the Biden administration and Cuba’s dictatorial government.

Cuba’s government will gain wealth from the economic remittances sent home by the exiled Cuban workers and will also export the young men and women who might otherwise stage uprisings against the government. The deal will also allow Cuban to send 20,000 more legal migrants to the United States, most of whom likely will be old to work productively.

The agreement also signals that Biden’s government will not pressure Cuba’s government to accept the return of Cuban migrants arrested at the U.S. border. Without a return process, the only way to exclude Cubans from the U.S. labor market is to have Mexico’s government bar their entry into Mexico, or else accept all Cubans into the little-used Remain in Mexico policy.

But the elite-negotiated population transfer adds more economic pressure to many millions of poor Americans — and to the population of at least 10 million Americans who have been pushed out of work. 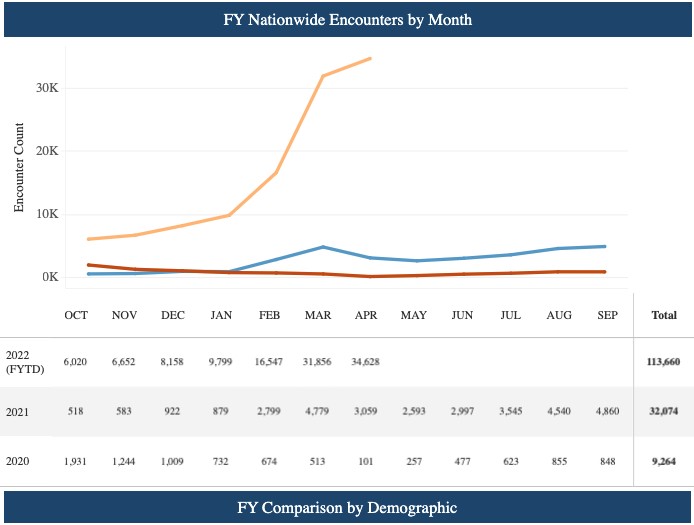 The inflow of Cubans is just one part of the flood of 1.8 million people invited across the border since January 2021 by Biden and his deputies, despite the Title 42 rule.

The 1.8 million number does not include legal immigrants, visa workers, the roughly 600,000 people who sneaked across the border, or the illegal migrants who are being allowed to stay under Mayorkas’ pro-migration policies. 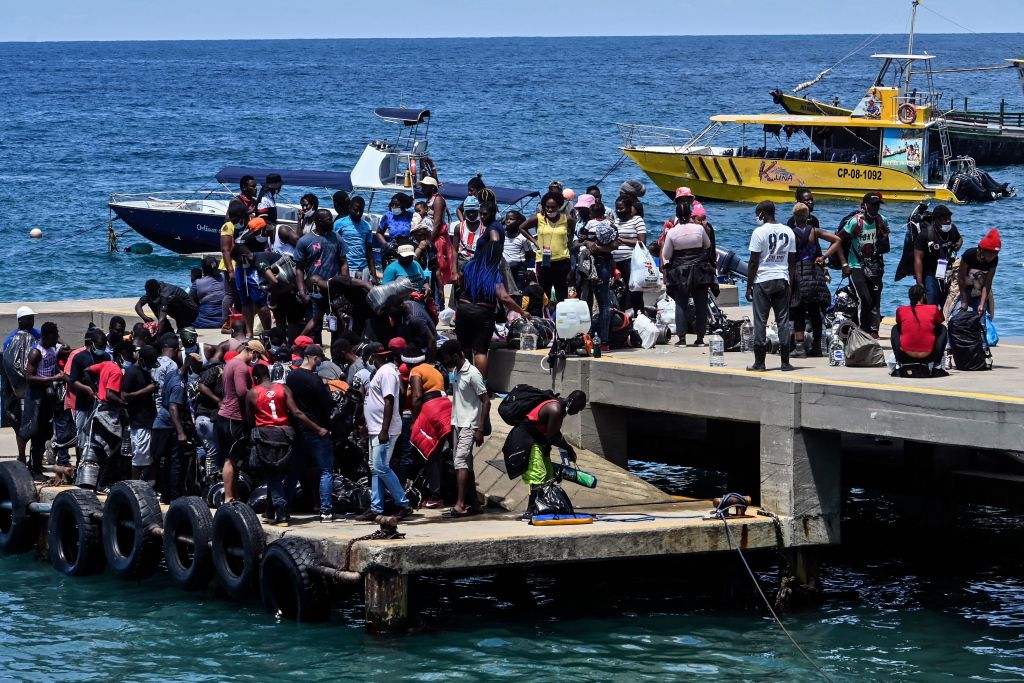 Migrants en route to the U.S. from Cuba, Haiti, and several African countries arrive in Capurgana near the border with Panama, Colombia, on July 31, 2021. (JOAQUIN SARMIENTO/AFP via Getty Images)

Overall, the inflow is adding more than one migrant to the United States for every three births.

That is good news for the progressives who allied themselves with pro-migration business groups.

Progressives who wish to transform the U.S. from a society governed by European-origin civic culture into a progressive-led empire of competing identity groups. “We’re trying to become the first multiracial, multi-ethnic superpower in the world,” Rep. Rohit Khanna (D-CA) told the New York Times on March 21. “It will be an extraordinary achievement … we will ultimately triumph,” he boasted.

The flood of Cuban migrants was reported by MSNBC on May 17:

“This is a really dramatic situation, my boy: everyone who can get out of here is doing so,” says a woman waiting her turn to apply for a visa in front of the Mexican consulate in Havana.

Like every other weekday, a crowd has gathered here after making an appointment months ago through the website of the diplomatic mission in the Cuban capital. On the screen of his cellphone, a young man watches a video of fellow Cubans swimming across the Rio Grande to the rhythm of a popular reggaeton song called El campeón (The champion). He says that one of the authors of the song, an artist named Kimiko, has just crossed into the United States through the Mexican border. “He’s already been baptized . ”

“Bray Perez, a 19-year-old Cuban university student, is fast losing friends to a growing wave of migration off the island,” Reuters reported on March 17. “Every time I go home, I find that 10 people have left … It’s hard to get up in the morning and know I’m not going to see them anymore,” he added.

The Democrats’ easy-migration policy is also encouraging young Cubans to migrate away from their families. But older Cubans — including those who cannot work — are trying to join their grown Children in the United States. For example, the woman at the Mexican consulate in Havana told MSNBC:

My two children left a year ago with their wives for Central America. They are already in Miami, where my first grandson was just born. My mother and sister left after the Special Period [a prolonged economic crisis in the 1990s], so I am all alone.

Business groups are eager to have old and sick people move into the United States, if only because it increases the consumption of food, housing, medical services, and government spending.

Mayorkas is a pro-migration zealot who insists that Americans’ home country must instead be a “Nation of Immigrants.” He is defending his decision to extract migrants for use in the U.S. economy, instead of helping the Cubans fight to regain control of their own country.

On May 19, Sen. Rick Scott (R-FL) quizzed Mayorkas about Biden’s negotiations with Cuba. He replied:

I am not involved in discussions with the Cuban regime. And I would respectfully request that you respect my humanity. Because I stand before this committee as an individual member of a family who fled communist Cuba. My father lost so very much and he wanted to raise my sister and me in a democracy and quite frankly, the greatest country in the world. I do not take steps to relax policies against an authoritarian and oppressive regime … I have condemned the oppression against the peaceful protesters on the streets of Cuba.

“I don’t think [Mayorkas] has a secret pro-Cuban [government] agenda,” said Mark Krikorian, director of the Center for Immigration Studies, told Breitbart News. “But that’s the actual effect of his policy.”

Since at least 1990, the D.C. establishment has extracted tens of millions of migrants and visa workers from poor countries to serve as legal or illegal workers, temporary workers, consumers, and renters for various U.S. investors and CEOs .

This economic strategy of Extraction Migration has no stopping point. It is brutal to ordinary Americans because it cuts their career opportunities, shrinks their salaries and wages , raises their housing costs, and has shoved at least ten million American men out of the labor force.

Mumbai: The National Medical Commission has issued a notice asking students to not travel to Pakistan for medical education, including dental programmes. This comes a week after the University Grants Commission and the All India Council of Technical Education warned aspirants that their education from Pakistan would be beyond the pale.
Those who joined Pakistan degree colleges and institutions before December 2018 or later after obtaining security clearance from the ministry of home affairs would be exempted though.
Two months ago, the medical education regulator had warned Indian students planning to pursue higher studies in China, saying it did not recognise “degree courses done only in online mode without prior approval”. The advisory against travelling to China for education came in early February after the Chinese government suspended all visas from November 2020 because of Covid-19.
Now, following the directions of the UGC and AICTE, the NMC notice issued on Thursday night, stated: “Any Indian national/ OCI who intends to take admission in MBBS/ BDS or equivalent medical course in any medical college of Pakistan shall not be eligible for appearing in FMGE or seeking employment in India on the basis of the education qualifications (in any subject) acquired in Pakistan.” The Dental Council of India issued a similar notice. The notice added: “However, migrants and their children who have acquired medical/dental or higher education degree in Pakistan and have been awarded citizenship by India would be eligible for seeking employment in India after obtaining Security Clearance from MHA.”
After the UGC and AICTE put out their notice last week, Pakistan’s foreign office “strongly deplored’ the issuance of such a public notice.
Data published by the ministry of external affairs in July 2021 states there were 230 Indian students enrolled in Pakistani institutions. In September 2020, over 354 students, mostly from Jammu and Kashmir , applied to cross the border into Pakistan when the country reopened educational institutions after the pandemic lockdown.
“There are hundreds of students enrolled in different medical colleges of Pakistan and they have no idea now what to do,” said a student over Twitter.
“It’s very unfortunate when students have spent many years in Pakistan to complete medical degree, suddenly UGC issued this notification from nowhere.”
FOLLOW US ON SOCIAL MEDIA
Facebook Twitter Instagram